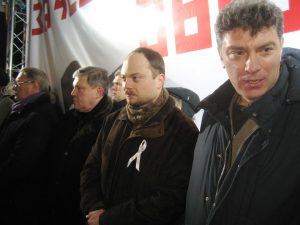 Russia sentenced the killer of Kremlin opposition figure, Boris Nemtsov, and four accomplices to sentences between 11 and 20 years, with the killer getting the full 20. Gaur Dadayev, the trigger man, got away easy as the prosecutor had asked for life in prison. The convicts were happy and jovial as the punishments were handed out.

Dadayev was an officer in the security forces of Chechnya’s leader Ramzan Kadyrov and allies have criticized investigators for not studying a possible role of Mr Kadyrov in the killing, writes The Independent.

The family of the late Boris Nemtsov was outraged. “The shortcoming of this sentencing is that those who ordered and organised this crime are not in the dock,” said Vadim Prokhorov, a lawyer for Nemtsov’s daughter Zhanna.

The trial showed the killers were promised 15 million rubles to split among them for the assassination. Nemtsov was killed walking across a bridge near the Kremlin with his girlfriend. He was shot six times in the back.

The justice system in Russia is riddled with corruption and it is likely the reason the men were laughing in the court room is perhaps they will spend very little time in prison. The leader of Chechnya, Razman Kadyrov is very powerful and will likely find a way to get the men released after the controversy dies down.

Just recently, when asked about the reports of gays being tortured and killed in Chechnya, Kadyrov stated ‘there are no gays here, so they can’t be killed.’