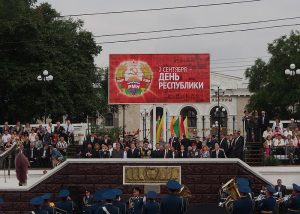 The country Nikolai Klimkin serves does not officially exist and has remained trapped in a limbo of impoverished stagnation for decades.

The 32-year-old is a solider in the army of the self-proclaimed state of Transnistria — a tiny sliver of land that claimed independence from Moldova just after the Soviet Union fell apart some 25 years ago.

About half of the nearly 500,000 people living in the region are ethnic Moldovans. A 2015 census showed Russians accounting for about 40 percent of the population and Ukrainians comprising much of the rest…

Russia Could Resume Strikes On Rebel Groups In Syria