The opposition party of the “New political center – Girchi” took the initiative to hold a referendum and find out public opinion about whether to punish Georgians for drug use. “Girchi” stands for full legalization of marijuana consumption and production. 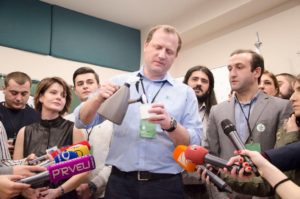 Party leaders and their supporters staged a New Year’s Eve event in an act of defiance and planted Cannabis in their office, knowingly violating the Criminal Code. Despite the fact that the Interior Ministry initiated a case, no one was detained, and the authorities only sealed and seized 84 pots with sprouts of cannabis from the party office.

“We have decided, and this is our new initiative for October of this year, when Georgia will hold local elections, a referendum should also be held. This so the population of Georgia can respond to the question, of whether drug use should be punishable in this country” , – said at a press conference, a party leader, Zurab Japaridze.

Representatives of the party intend to address the referendum with an appropriate application to the Central Election Commission, where they will try to register the issue as a question on the ballot, he said.