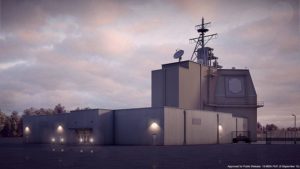 Since the days of Ronald Reagan’s Star Wars, the Kremlin has been worried about Western missile defense. In fact, one could make the case that the development of this technology is what brought down the Soviet Union, as they could not keep up with the arms race. Gorbachev became aware of this reality and allowed the USSR to fall apart. It seems nothing has changed in regard to Moscow’s views on the subject.

After President Obama cancelled the missile defense system in Poland early in his term, in a bid to appease Russia, NATO stood up a replacement system in Romania last year. Another sister system is being built in Poland. Today, Russia called Romania, a member of the North Atlantic Treaty Organization alliance, a direct threat to the security of the Russian Federation.

The missile defense sites are in conjunction with massive NATO maneuvers in Poland and the Baltic states in response to perceived Russian aggression in the area. Recent studies showed the Russian military could overrun the former Soviet territories in the Baltics in a handful of days. American tanks and other armored vehicles have returned to Eastern Europe in force. The personal will be rotated on nine month tours in-country with the equipment staying in garrison.

The election of Donald Trump to the presidency of the United States, and Trump’s comments on the problems within NATO, have made the exercises even more prominent in relations between the West and Moscow. Everyone is wondering where Trump will come down on the issue of U.S. troops on the Russian border. So far, it seems the policies will remain in place with Trump deferring to the military commanders in the field.

“Romania’s stance and the stance of its leadership, who have turned the country into an outpost, is a clear threat for us,” Alexander Botsan-Kharchenko, a senior Russian foreign ministry official, told Interfax in an interview, reports the Interfax news agency.

“All these decisions … are in the first instance aimed against Russia,” he said, accusing Romanian authorities of reveling in anti-Russian rhetoric.

NATO has declared the missile defense shield being developed is only to deal with the threat from Iran and other rogue states. Russia has repeatedly categorically is does not believe this to be the case.

When The Citizens of Arzamas, USSR, Thought Nuclear War Had Started…Death Was Everywhere