St. Isaac’s Cathedral is one of the most visited tourist sites in Russia’s old imperial capital, St. Petersburg. The cathedral is a UNESCO World Heritage site and has been an important museum since Russia’s 1917 Bolshevik Revolution. More than 3.5 million tourists visit it every year.

The local governor earlier in January announced the city was transferring the iconic St. Isaac’s Cathedral to the Orthodox Church. The announcement sparked protests in St. Petesburg and increased the debate over the decision.

Some experts are concerned that when it gains ownership, the Orthodox Church will neglect it’s cultural side and will turn it into religious site.

Hundreds Protesters rallied in St. Petersburg against plans by city authorities to give a cathedral to the Russian Orthodox Church.

“St. Isaac’s Cathedral in the use of the Russian Orthodox Church is the fulfillment not only of the wishes of the faithful, but also of provisions of Federal law”, said the Chairman of legislative Assembly of Petersburg Vyacheslav Makarov.

More than 200,000 people have signed an online petition against the handover. It lists concerns related to the maintaining of the cultural heritage site, which is in need of costly restoration works, the fate of museum exhibits, including a rare Foucault pendulum, and general fears that the cathedral, visited by over 3 million tourists a year, could lose its museum function due to anticipated restrictions. 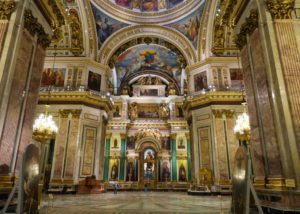 However, Russian Orthodox Church officials have maintained that the cathedral will not only continue its museum functions, but even improve them. The Church previously requested for the building to be transferred in 2015, but that request was turned down by the St. Petersburg administration.

Protests around St. Isaac’s Cathedral caused an increasingly passionate debate over the relationship between the church and the Russian state. The transition of Cathedral has been seen as symptom of the growing power of the Orthodox Church and part of social conservatism in Russia, where President Vladimir Putin has appealed to traditional Russian Orthodox values as opposed to Modern Western values. 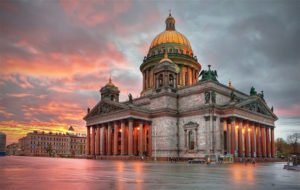 Battle Between East And West Plays Out In Serbia; Vucic Says Yes To Cheap Russian Gas