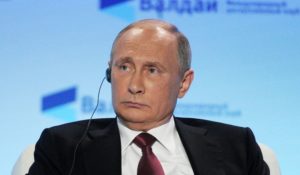 Many pundits have attempted to explain the rationale behind Russian President Vladimir Putin’s actions in Ukraine, Syria, and elsewhere. I think it is very simple: Putin wants to make Russia great again. He has some successes and some failures.

The annexation of the Crimean Peninsula and the Russian expeditionary landing in Syria have bolstered the Kremlin’s confidence and supported the Kremlin’s narrative that Russia is back in a big way. The loss of President Viktor Yanukovych in Ukraine and the lingering, smoldering conflict in Donbass have not been something to write home about for the Russian people.

However, Mr. Putin’s genius is that everyone knows the successes — the failures, not so much. This is by design, of course.

The Russian state media propaganda arm has been startlingly effective in presenting Moscow’s geopolitical narrative to the world. It’s not just the main outlets like RT, Sputnik and others. The Kremlin has a web of other lesser-known entities that amplify and propagate the Russian spin all over the world in a myriad of languages. You can see it on YouTube, Twitter and other social media channels. Moscow’s troll army is still alive and well.

As I have said before, Mr. Putin is a big believer in Machiavelli’s axiom: It is better to be feared than loved. Sailing an armada through the English Channel, running an infomercial with Russian weapons in Syria, possibly interfering with a U.S. presidential contest — all of these actions are designed to present Russia as a great power that, in the absence of anything else, must be respected and dealt with. Russia’s voice and agenda must be heard.

So that begs the question, what should the next American president do about Russia? How should the United States treat the actions of the Russian Federation in Syria, Eastern Europe, the Baltics and beyond?
I think there are several steps that must be taken.

First, the West must step up its game in the information war and confront the narrative that Russia is telling the world.

America’s historical quest for freedom and democracy has been all but stamped out under the Obama administration in its quest to weaken American power, hard or soft. During Soviet times, Radio Free Europe and other Western media outlets did a good job of telling the world, behind the Iron Curtain and elsewhere, what we stood for and gave hope to the oppressed.

We need to restore this vision and capability with similar, modern media efforts around the globe to tell the American story. Hybrid warfare is real and the Russians are really good at it. It’s time we got back in the ring.

Second, I think we have to confront Russian aggression where it is in our national interest, there and only there.

NATO is a good example. There can be no pink lines for NATO as there were in Syria. The consequences of interfering with a member state has to be very clear to all who may threaten it. Leave it up to the generals to decide how to construct such a deterrent but make sure it is credible but nonthreatening to Moscow, if that is at all possible. If the alliance cracks in one place, it cracks everywhere.
Turkey is a major problem at the moment and that situation has to be dealt with. It will take a leader with great negotiation skills to put that situation back in the bottle.

Hopefully we will have one of those in the White House in a few months.

Finally, the next president should cooperate frankly with Moscow in the future where our interests align.
There are many situations that fall into this category. The fight against terrorism is a natural fit. It is a scourge that must be defeated around the world.

In short, due to our economic weakness at the current time, America must pick her battles, make her red lines real and credible, and refocus our aim on what really matters our national security, Western Europe, freedom, democracy and capitalism instead of nebulous, culturally Marxist alarmist gunk like global warming and open borders.

We are at a critical juncture in our history as Mr. Putin’s Russia rises. To quote John Wayne, “Life’s tough, but it’s tougher if you’re stupid.”

It’s time America had a president for once who could play a weak hand well, like Mr. Putin.

Originally posted in The Washington Times

Opinion: The Time Is Right For A Deal With Russia