Stay tuned to Tsarizm.com for an extensive series on the ‘Anastasia’ issue…more interesting evidence to be provided in conjunction with IceBox Media. 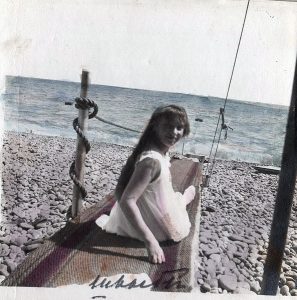 On  July 17, 1998 a grand yet solemn event took place in St. Petersburg, Russia-the reburial of what were thought to be the extant remains of the family of Tsar Nicholas II, his wife Empress Alexandra Feodorovna, their children and members of their retinue with them in captivity in the Ipatiev House (dubbed “The House of Special Purpose”) in Ekaterinberg, Russia. President Boris Yeltsin was in attendance as were members of the Romanov Family. These remains have since been exhumed and taken to a laboratory where they still await their eternal resting place.

DNA examinations have purportedly substantiated the relatedness of a number of the remains, along with the identification of others including family physician Dr. Yevgeny Botkin. DNA, of course, can tell us gender and biological parentage, but age, shape, wounds causing suffering and death as well as skull reconstructions must be done from the skeletal remains themselves.

The persistent official narrative is that Anastasia, long rumored even now to have somehow escaped the carnage in the basement of “House of Special Purpose,” was among the remains found, with Grand Duchess Maria and Tsarevich Alexei not yet found. When bits and pieces of bone and ash were found near the original burial site outside of Ekaterinberg after the initial grave pit was excavated, the official narrative was somewhat modified that the two, at least as much of them as was available in the miniscule sample, were the missing remains.

Current Orthodox Patriarch Kirill has been unusually cautious about making any definitive statement about the state of the remains of the entire family and is quoted as insisting that he deemed the findings of the state authorities “to be erroneous.”

In May 2015 Russian Prime Minister Dmitry Medvedev ordered a new interdepartmental effort to commence with the goal of finding conclusive evidence. The Church, surely, would take pleasure in coming to a definitive conclusion by the time of the centenary of the regicide on July 17, 2018, while the Romanov Family has expressed openness to the “naked truth” in an effort to have closure as a family.

The question remains, however, dogged: are the bits and pieces of bone found near the original pit truly related to the family members supposedly found earlier? If so, are they really Maria and Alexei? Or are they Anastasia and Alexei? Are they pieces originally connected to those first found? Or are they neither, planted there in an effort to accelerate an official government closing to this regrettable chapter in Russian and World history?

Russian and American forensic experts initially worked with the preliminary remains and came to unique albeit incongruent conclusions. The Russians maintained from a skull measurement that Anastasia had been found. The Americans claimed that it had to be Maria and that Anastasia was missing.

The Orthodox Church in Russia is prudently taking its time to consider evidence from many sources. Their patience, diligence, and willingness to scrutinize various findings may soon lead to the ultimate satisfaction of their demanding criteria for which they have been praying with humility and intense faith. Sans doute, the Almighty has heard that prayer and will not let it go unanswered.

US Veterans May Need To Deal With US Corruption