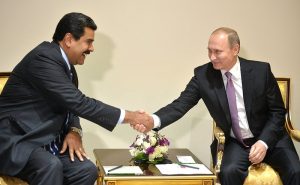 Russia and Venezuela signed a ten year debt restructuring agreement which would essentially kick the can down the road for the socialist Latin American country to repay its debts to the Kremlin. Venezuela is on the brink of societal and financial collapse as the policies of President Maduro continue those of President Chavez before him.

In a classic case of socialism running out of other people’s money, including their own, Venezuela has wasted billions in loans from Russia, and China, in an attempt to create a socialist paradise. Extereme mismanagement, incompetence, and corruption have destroyed the Venezuelan people’s future. For a country that is rich in natural resources, the future looks bleak.

“Venezuela borrowed from Russia in late 2011, but failed to keep up with payments on the debt in 2016 as the South American state faced a full-blown economic and financial crisis,” wrote Reuters.

Caracas will pay Moscow back $3.15 bln over a 10-year period and payments will be minimal for 6 years said the Russian Finance Ministry.