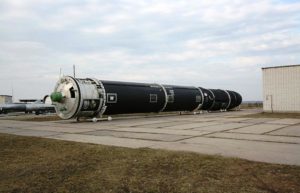 A source within the Russian Defense Ministry said to Russian news service TASS that testing of the Sarmat, or Satan II, ICBM has been delayed until the second quarter of 2017. The weapon is the heaviest missile ever developed of its kind and can carry 10 nuclear warheads. The Sarmat is designed to defeat American nuclear missile defense systems.

“[Silo launch] testing of the Sarmat from the Plesetsk launch facility in March won’t happen,” the source was quoted as saying. “It has been shifted back to the second quarter of 2017, likely in April.”

Last year, the Defense Ministry’s Zvezda news agency claimed Sarmat was so powerful, that a single missile could evade Washington’s defenses and wipe out the entire state of Texas, reports The Moscow Times.

TASS reported the reason for the delay was to improve testing stand infrastructure.

50% Of Russians Believe Russia Should Dominate The World