At the US Alumni Leadership Forum on April 30 the Head of Georgian Government, Prime Minister Giorgi Kvirikashvili thanked the US for financing different academic programs in Georgia. He praised US funded programs for raising future leaders of Georgia.

During his speech Kvirikashvili spoke of Georgia-US diplomatic relations and shared his own academic experience in the US. 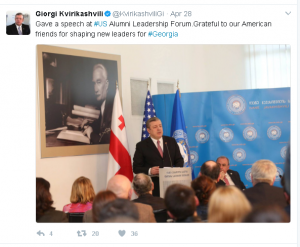 “1995 was the year when my first exposure to the US took place. This was the year when Professor Robert Medearis at UC Davis – many of you may remember-the founder of the Silicon Valley concept and the Silicon Valley Bank came to Georgia together with George Schultz to establish the first US-sponsored training program in Georgia. It was called the Georgia Business Training Program in its first year and Georgia Banking Training Program in the second, of which I took part. I had a real privilege – and I think it was luck, first of all – to be part of this group of ten young Georgian students who went, right after the civil war and disaster in this country, to the United States.

… This experience turned out to be very important in my banking career because it was related to agricultural lending. When I came back, it turned out to be a turning point in my career,” – Said Kvirikashili and and added that those two months made him decide to apply for a US master’s degree program.

Georgian MP declared that the support of the US has been crucial to Georgia’s success, and that America remains Georgia’s premier strategic ally.

“Although there remains a lot of work to be done, I cannot help but express my deep appreciation and gratitude for the United States for standing with us in the most dramatic periods of our recent history and being one of the most ardent supporters and contributors to Georgia’s modern success story,” said Kvirikashvili.

On The Front Lines Of Ukraine’s Forgotten War