February, 2017: My Airplane flies over Boryspil airport in Kyiv. I see absolute white from the porthole. It’s snowing… Quiet holds over Kyiv.

It’s ice-cold outside. -23 F. I thought I was well prepared for the Kiev voyage, but I was wrong. My ordinary coat is not warm enough for this freeze. Only Ukrainians, dressed in fur coats can beat this cold.

Three years ago, thousands of people were standing on Maidan square in the same chill. People who were against a corrupt and violent government and who wanted to defend Ukraine’s Euro-atlantic course.

On that day, government force against demonstrators sacrificed the lives of more than hundred peaceful citizens. However, it was only the beginning.

Today, East Ukraine is at war, Crimea is annexed, and the solution for the conflicted territories lays in the shadows.

I catch a taxi. I see the Ukrainian flag attached on the wind-screen and I smile. Meanwhile, my driver is not the only one – national flags fly on every second car here.

I look through the window; the view reminds me Tbilisi’s suburbs, only the colors are different –  the blue and the yellow are dominant here.

We drive to the center of the city and pass Maidan square to get to the hostel. I take it all in at a glance and realize immediately – Maidan was three years ago, but its signs are still eminent..

I walk to the center the next morning.  There are burned buildings on Kiev’s main street Khreshchatyk – a former department store and the trade union house. 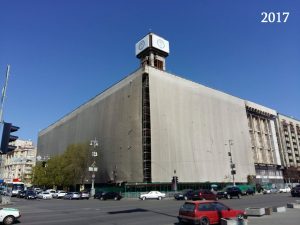 My first visit to Ukraine was in 2015. I remember these buildings, there were huge banners with very significant words on them – “United Ukraine”, “Peace and Defense for our children”.

On the same place where three years ago thousands of people stood to defend Ukraine’s future, now you can meet locals with white pigeons and monkeys. You can take photos with them for only 30 hryvnias. At the same place people are higgling with “Putin Khuilo” toilet papers. 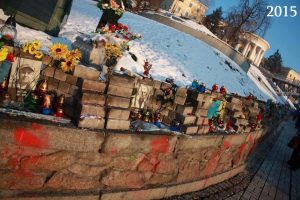 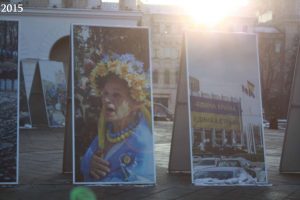 Today freedom square is empty. Two years ago, there was a huge trident made with icon-lamps – the Ukrainian emblem and quote – “Glory to Ukraine-Glory to heroes”. Now there were only a few people walking on Maidan, looking at the demonstration photos and memorials covered with a sea of flowers. None of those flowers were dried, all of them were fresh.

Did Ukraine’s government justify the people’s hopes? What’s the general feeling towards Russia and its politics? How did public sentiment change after three years from Euromaidan and where is the solution? – the majority of people avoid answering these questions.  Probably, journalists have already bothered them or maybe they are too tired to answer. But anyway, I contrive to talk with some of them: 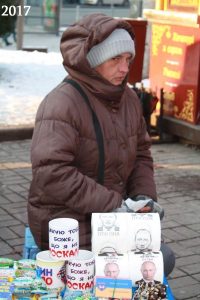 A sixty year-old Ukrainian woman with red lipstick is looking at me with the cynical face. She is not even trying to hide her thoughts – she doesn’t want to speak about these topics with a young and inexperienced girl. She tells me openly that I can’t understand it, but finally she gives up and starts:

“If I could, I would burn to ashes everyone who intrudes into our territory. Conclude a truce? – by no means, we must just annihilate our enemy. I can’t even believe, how could our friend nation (Russia) behave like this with us”.

Suddenly, I see young boy dressed in sack suit. I notice his interest in my questions and I approach. Happy, that someone is interested in his opinion, he immediately starts sharing his judgement:

“Even three years ago, it was clear that Pro-European course would damage relations with Russia, but Ukrainians subconsciously did not agree on this. We wanted to hold good relations with everyone and we considered Russians as our brothers, but today everything has changed”.

“Do you think that Ukraine must join the European Union?”, “Should Ukraine maintain economic, political, and cultural relations with Russia?” According to research conducted by the Kyiv sociology institute, nearly an equal amount of people answered affirmatively to these questions.

Today people have changed their mind. The European course has never ever been as desired by Ukrainians as now.

I get tired of walking and I sit down on the bench. I hopelessly ask woman who is sitting near me to answer my questions, unexpectedly she starts:

–         Ordinary people want to be friends with Russians, because they are our brothers, our children, we are connected and they aren’t our enemies. We are one big family. You won’t write my name, will you?

–         Then I can speak my mind openly. You have already shut down your voice recorder, didn’t you?

–         I always remember my father’s words that one day Ukraine will disappear from the map.

Actually, today Ukraine is not in an enviable situation and even the most optimistic Ukrainians recognize that.

In 2015, I attended the European Students for Liberty conference in Kiev. The conference was devoted to Georgia’s ex-minister of economics and CEO of “Knowledge fund” Kakha Bendukidze’s memory. Kakha Bendukidze was defined in the conference program as “The most clever and the energetic defender of free-market ideas in the post soviet area.

The speakers, that arrived from different countries, were speaking about Ukraine’s perspectives, reforms and the future of liberty. All of them, mentioned Georgia in their speech. For Ukrainians, Georgia’s economic and political reforms became the object of imitation.

According to the speakers, one of the objectives of Ukraine was to imitate economic reforms conducted in Georgia in 2004-2008.

Every participant agreed on the fact that Ukraine was in a dramatically grave situation and needed help from other countries. That’s why Ukraine adopted a special law, allowing foreigners to take high official positions in the Ukrainian government. In that regard, we witnessed many Georgian politicians moving to Ukraine to help the country mirror Georgian reforms. Mikheil Saakashvili, Georgia’s ex-president, who recently resignated from the post of the governor of Odessa, remains very active on Ukrainian political scene.

“If Kakha Bendukidze could come in our government as it was planned, I would say: “He can do it! Today Ukraine needs fast and rough reforms. Maybe painful, but useful. And it doesn’t matter who will make it -Ukrainian or Georgian” – says political science master Stanislav Zozulia.

I can not say whether Georgian politicians matched the expectations of the Ukrainian people, but I remember everyone in Kyiv asking me if it was true that in Georgia the police don’t take bribes, that now you can enter a university based on your exam results, that you need to pay only official fees to get documents etc. Yes, this is all true for Georgia, but for Ukrainians, as for the citizens of any country where corruption is the biggest problem, this is unbelievable. 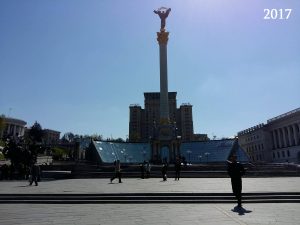 Everybody agrees that Ukraine and Georgia have too much in common – Pro-Western agenda, European values, a quite similar recent past, and of course, a common enemy. I remember 08.08.08 – war with Russia isn’t new for Georgians. 20% of Georgian territory remains occupied by Russian troops still today. That’s why, as a Georgian, I can completely understand the emotions, feelings and sorrow of the Ukrainian people.

This is my last day in Kiev. These few days were absolutely insufficient to hear and see everything this city and its dwellers could offer me.

Boryspil airport again… Same indifferent look on the faces of the passengers, absolute white through the porthole. The airplane took off above the clouds. I fell asleep. Sun rays woke me up. I realized that I was already in my southern motherland and that I left my northern friends thousands of miles away in -30 F. 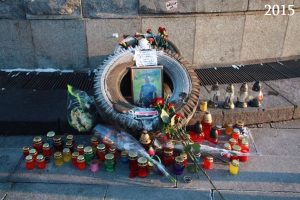 Ten Spectacular Russian Natural Landscapes That Will Amaze You