JERUSALEM, JUNE 2014 – In June 2014 ISIS attacked Camp Speicher in Iraq. The group captured more than 1,000 mostly Shi’ite cadets and systematically murdered them. In Jerusalem the hot summer of 2014 was dominated by news of the kidnapping of three Jewish teens in the West Bank and their subsequent murder. They were kidnapped on June 12, the same day as the Camp Speicher massacre. On July 2nd Mohammed ABu Khdeir was murdered in Jerusalem. I was living in Jerusalem and these local events were the most important story of the time. In addition Israel and Hamas were preparing for war in Gaza over these tensions. ISIS seemed far away.

I remember sitting with friends in Beit Hanina and watching video from Iraq of ISIS crimes. Many of these videos were openly shared on Facebook and Twitter. They showed the cadets at Camp Speicher being rounded up and executed. Initially I thought they couldn’t be real. But they were very real. Yet media were still calling ISIS “insurgents.” It was surreal. This was mass murder of thousands of people. Yet the world was silent.

ISIS had conquered a swath of Syria and Iraq and was threatening Baghdad. In Mosul and Nineveh ISIS expelled Christian minorities. They fled towards the Kurdistan region. Yet the “insurgents” or “militants” were seen as just another in a long list of extremist groups to emerge from the Syrian Civil War and Iraq. The “insurgency” in Iraq had returned. COIN had failed. The Iraqi government of Nouri al-Maliki had failed. The US had fatigue from years of war in Iraq. People wanted the conflict to go away.

But it wasn’t going away. Everyday on social media there were numerous posts by ISIS supporters. In Europe English speaking supporters of ISIS were flooding Twitter with posts and discussions. They talked about the “kuffar” and the right to “rape.” They were openly preaching genocide. But no one was paying attention. 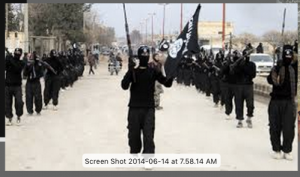 JULY, 2014 – I also wasn’t paying attention. I looked back now at some of my posts and screenshots from that period. The earliest mention of ISIS I could find was an image from June 14, 2014. This was ten days after they had taken Mosul. 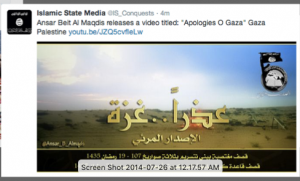 From that moment there were most posts and screenshots I took. One was about a Saudi doctor who had allegedly joined ISIS and been killed. There was a massive amount of pro-ISIS propaganda on social media. Videos, photos, tweets, everything. Accounts openly calling themselves “Islamic State media” were spreading hatred and celebrating. 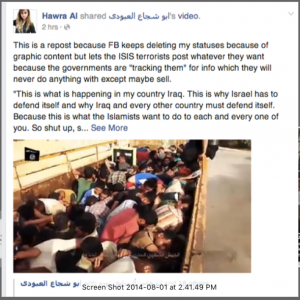 Some users even pointed out that while posted about the crimes of ISIS got them banned from Facebook or their posts removed, the pro-ISIS videos and other details did not get banned. It would be as if social media banned images of the death camps and atrocities of the Nazis, but not videos of speeches by Hitler. 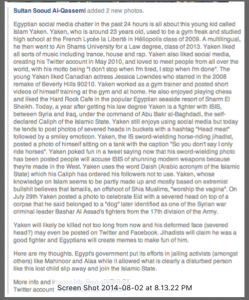 AUGUST 2014 – The first day of August brought a long post by Sooud al-Qassemi, an Emirati commentator. In his long discussion about an Egyptian man who joined ISIS. He sketched out a life of this person who seemed so far from the supposedly conservative far-right ISIS mentality. The man had been into westerners, like the Hard Rock Cafe. He had a university degree. Then he showed up wielding a sword with the extremists. But although it seemed like all fun and games, the reality was more brutal. “On July 29 Yaken posts a photo to celebrated Eid with a severed head on top of a corpse that he said belonged to a ‘dog’ later identified as one of the Syrian war criminal Al Assad’s fighters.”

So while we were comfortable in our beds away from Syria and Iraq, supporters were flocking. Qassemi noted that this particular volunteer had little religious knowledge and it was based on “extremist b—-it.” While that may be, this was part of the narrative that painted ISIS members as just crazy and “disturbed” views were not to be taken too seriously. But they were deadly serious.

At the time I was active on Twitter, and I was even blocked by pro-ISIS accounts. I also screenshoted some of the more bizarre discussions the accounts were having, discussing Qatar’s government for instance (above).

Little did we know at the time that ISIS was preparing its assault on Mount Sinjar and the Yazidis in northern Iraq. They had already been massacring Shi’ites and Christians and their policy was clear. The Iraqi army had retreated south and whole divisions had abandoned their equipment. ISIS was well armed and parading its captured humvees and jeeps, of which there were some 2,000, in videos. 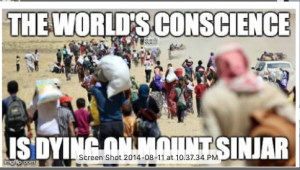 In Sinjar, called Shingal in Kurdish, the Kurdish peshmerga had dug in around Yazidi villages and at checkpoints on the roads leading to Mosul and Tal Afar. But the Peshmerga were unprepared for the assault that was coming. When rumors emerged on August 2nd that the attack was imminent and when ISIS supporters in Tal Afar begin targeting Yazidis, the retreat began. Defenses around Yazidi areas were abandoned. Some Yazidi fighters with AK-47s tried to hold off the attack, but within a day parts of Sinjar had fallen and hundreds of thousands were fleeing.

On August 7th US President Barack Obama would order airstrikes. By then it was too late for 10,000 Yazidis. Women were being sold into slavery and men massacred. ISIS was on the road to Erbil and had taken Mosul Dam on the road to Dohuk. YPG was struggling to open a corridor to Sinjar from Syria to save the Yazidis. Qasim Shesho “the old tiger of Mount Sinjar” and his 17 fighters were at Sharf e-Din shrine vowing to fight to the end. The Kurdistan region of Iraq was threatened. Blame and accusations would follow. Who was at fault. Why hadn’t more been done. Why was Sinjar abandoned.

Four years later, as I write this on August 1, the shame of the silence before the genocide is palpable. The mass murder at Camp Speicher, the Badush prison massacre on June 10, the expulsion of Christians in July, all the signs of impending genocide were there. ISIS had not hidden its agenda. Like Nazism in the 1930s, it had proceeded systematically. It was planning the genocide of Sinjar before it happened. But powerful governments that could have done more, did little or nothing. In Europe thousands had gone to join ISIS. They had crossed NATO countries to do so. They were openly recruiting. Online there was little attempt to stop them. By 2017, three years after the genocide, Twitter had closed almost 1 million terrorist-supporting and linked accounts. But when it was most necessary little had been done.

The genocide of Yazidis was the first social media genocide. It happened online, and it happened for real. The Telegrah even spoke to a 17 year old woman who was sold into slavery in September 2014 while she was still held by ISiS. It’s as if people were able to call victims in Auschwitz during the Holocaust. The excuse that no one knew what was going on in Sinjar could not be maintained. And yet even though everyone knew, very little was done either to prevent the genocide to to help victims when they had just been captured. For instance thousands of women were transported to Syria to be sold. Nothing was done to track them. Many times their families even spoke to them but no resources were put in by the international community to help track those calls, or track the Telegram and other channels used to sell people and abuse them.

Much more should have been done in the two months leading up to August 3. Today the US-led Coalition has almost 70 countries aiding it to fight ISIS in Syria. The US role in Syria is an outgrowth of August 2014. The refugee crises in Europe is largely an outgrowth. And yet today ISIS has recently carried out attacks in Tajikistan, in Pakistan and the Philippines.

As we approach the fourth anniversary of these terrible crimes, there are recriminations and blame, but there are many questions as well. Questions about the foreign fighters who so easily crossed borders. The technology and social media role. The excuses and whitewashing that took place before the mass murder. The fact that slavery was brought back in 2014, that headlines talked about “six year old slaves.” The tragedy and trauma continue. We still have a chance to do more today, to make right what went wrong in August 2014.