Location of the attacks

Details emerging from the July 25, 2018 ISIS attack on Suwayda now reveal the attack to have been more well orchestrated, deadly, and targeted than previously reported. “They slaughtered them,” one woman told a local volunteer who went to fight ISIS when reports of the massacre began. This was in the town of Rami east of Suwayda near Al-Mushannaf.

A Guardian report and other reports that have emerged provide new details on what happened. Initially thought to have been a coordinate bombing campaign directed at Druze in Suwayda, the actual attack was far larger, similar in scope to the Kirkuk raid in October. 2016 in which 100 ISIS members attacked Kirkuk from Hawija to distract from the Mosul offensive. Unlike Kirkuk this ISIS attack appears to have been directed solely at Druze and ISIS kidnapped up to 14 Druze women and massacred civilians in a campaign that looks like its mass murders four years ago at Camp Speicher and Sinjar and its targeting of Yazidi women.

“Dozens were kidnapped and wounded, many are missing, and the slaughter has upended the peace of the ancestral homeland of the minority Druze sect, which had so far largely escaped the violence that devastated much of Syria,” the Guardian report notes. “Interviews with Sweida residents offered a glimpse into a brutal but well-planned, 12-hour attack that appeared to have evaded government security forces – and displayed the terror that Isis can still sow despite its repeated battlefield defeats and retreat across Syria and Iraq.”

As the attack unfolded from the eastern desert, ISIS snipers arrived and ISIS members went house to house killing locals. In a new detail, not seen before, “in most homes the militants left a single survivor as a witness to their brutality,” K. Monther told a reporter. The death toll grew to more than 250 and it appears many victims were outside of Suwayda itself. Four suicide bombers penetrated the city and attacked a market, and a downtown area. They killed 30, which means most of the victims were not from the city but in towns that were attacked nearby.

“In the beginning, the attack took us by surprise, but the heroic youth of Sweida rallied quickly in the centre of town and the villages that Daesh [Isis] had attacked,” said Osama Abu Dikar, according to the report. More perplexing are the claims that the ISIS members came from the desert after they had been bussed there in an agreement with the regime to surrender Yarmouk camp. “Their arrival to locations between 10 and 40 kilometres from the majority-Druze province led to great consternation among locals.” 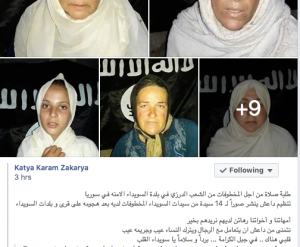 Another disturbing aspect of the new reports is the claim that 14 Druze women were kidnapped and that ISIS systematically photographed them and sent photos to their families. These were posted on social media. ISIS had not made demands as of July 27. One man writes “Heartbreaking! Just when we thought the Suwayda massacre couldn’t have been any worse, ISIS terrorists shared pictures of 14 women and young girls they’ve kidnapped during the attack. The Jihadists are holding them as hostages after they’ve executed all the men they’ve taken.”

Syrians have also expressed outrage on social media. A former head of a council in Idlib wrote on Facebook that more people should condemn the attack, according to a post by Aymenn Jawad al-Tamimi. There have also been conspiracy theories put forward and claims and counter claims that the attack was due to incompetent local security and the fact the Druze area has been left outside strict government control. Pro-Assad accounts claimed that Druze had resisted the regime’s military, avoided the draft and that the attack happened because of this (“did this to themselves”). For instance Firad Maksad tweets that locals felt it was not a coincidence: “regime pressure to end relative autonomy & privileges afforded during the war. Timing leading many locals to connect the two.” In June the regime pressured Suwayda to turn over “deserters” to the army.

Bab Al-Mandab Crises: Interview With Ghanem Nuseibeh…Saudi Arabia Is On The Front Line

On July 27 fighting was ongoing at Chebeke (Shbeike) village. Some pointed to the fact that the village is on the way to the US-run base at Tanf in Syria near the Jordanian border insinuating that the regime’s inability to take control of the border area has allowed ISIS to percolate.

In recent weeks ISIS has gone through several changes. It has changed its governance structure, as Tamimi noted, to “Iraq Wilaya” and “Al-Sham WIlaya” although it still uses both Al-Sham Wilaya and Wilayat Hawran in media. Despite being pressured by US-SDF Operation Roundup in eastern Syria near the Iraqi border and by the Syrian regime offensive an Yarmouk basin near the Golan, the attack on Suwayda illustrates that it wants to show it can still carry out mass killing.