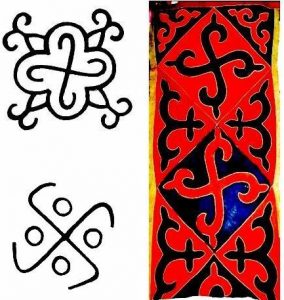 Nomadic horsemen occupying the inhospitable steppes between the Black and Caspian seas in the sixth millennium BC and Semitic copper miners toiling for their Egyptian overlords in the Sinai Peninsula in the second millennium would not normally be expected to have much in common. Neither had what in today’s world would be called “agency”, and both have now vanished, leaving behind only a few clues to their existence. And yet I am writing this in the language of the steppe dwellers using a phonetic alphabet pioneered by the copper miners. History has a sense of humor, or so it would seem.

It turns out that the Proto-Indo-European nomads and the Semitic desert people had extraordinary agency, after all. In fact, their combined and uncoordinated efforts produced a language of such malleability and adaptivity that it was adopted by cultures as disparate both temporally and geographically as Iran and Lithuania. As it happens, modern languages that directly derive from the language of the nomads dominate the globe from Sakhalin Island to the jungles of the Amazon, from beyond the Arctic Circle to the southernmost tip of the Tierra del Fuego. Only the variants of the Chinese language can today offer serious global competition to the family of the Indo-European languages. 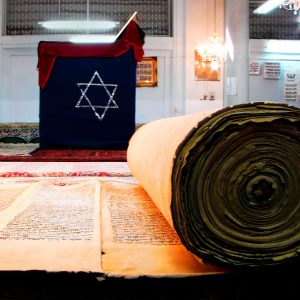 The truest of all truisms, the observation that necessity is the mother of invention must have played a big role in the development of the most successful system of writing ever devised by the Human race, the one I am using right now, the phonetic script derived from the scribbles recorded by copper miners in the Sinai. Far from the pyramids and the temples with their scribes versed in thousands of Egyptian hieroglyphs, they still had need to record their business transactions and their thoughts and their feelings. Ever wonder why the Latin letters M and N have similarly squiggly design? Well, mystery solved! In Semitic languages like Hebrew and Phoenician m(ayim) is water and n(achash) is snake. Both are things that wiggle and squiggle as is so painstakingly beautifully attested to by their Egyptian hieroglyphs. The copper miners didn’t have the skills or the time to carefully recreate these hieroglyphs, but they knew what they meant, at least the most basic ones. So a simple squiggle became the symbol for the first SOUND in their word for water and a different squiggle became the symbol for the first SOUND in their word for snake. The origins of the symbols was soon lost, but their adaptability for the representation of any combination of sounds was THE breakthrough that enabled modernity.

It is a true testament to the power of the one-two punch of Indo-European languages combined with Semitic phonetic scripts that I could have been writing this article in Armenian, in Hindi, in Farsi, in Lithuanian, in Welsh, in Old Church Slavonic, and in modern Russian, all without leaving that most powerful of linguistic frameworks.

It is equally a testament of the human soul’s near infinite capacity for evil that this crowning achievement of linguistic prowess, the Indo-European family of languages has in the recent past and now in our presently troubled world been abused to provide “intellectual” support for the most vile and murderous regimes our planet had ever known. Twice in less than one hundred years now, first in 1930’s Germany and now in present-day Iran, the wonderful linguistic legacy of the prehistoric steppe dwellers is being coopted to support eschatological theories of racial purity and world domination. Much violence had to be done to any historical fact or honest historical research to support these “theories”, but it didn’t stop the Nazis from coopting the name of an old tribe from Northwest India, the Aryans, imbuing that name with magical powers and making it the source of racially and thus culturally “pure” German people. The same historical misappropriation lies at the renaming of the land known throughout history as Persia into “Iran”, different pronunciation of the word “Aryan”. 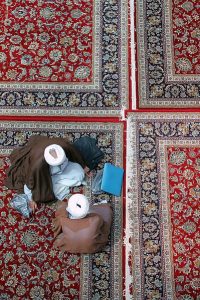 It is rather curious that the intellectual followers of Nazi Germany, a land populated by North Europeans, is Persia, an ancient culture that is uniquely distinct from both the Greek. Rome, and Norse derived cultures of Europe and the Semitic and Turkic cultures of the Near East. The solution to this enigma lies in viewing both Nazi Germany and today’s Islamic Republic of Iran as malignant perversions of their original cultures. Just as a cancer cell, in response to certain stimuli, becomes a biological perversion of a healthy cell, a perversion that cannot be reversed, so the Nazification of Germany and the Shia Islamization of Persia constitute a violent, malignant, and irreversible perversion of their original cultures, cultures that once were among the highest achievements of the human spirit.

What may have been the causes of such perversions? Is there any commonality in what has happened to Germany and Iran? While it is dangerous to draw exact parallels between such disparate cultures, a number of important similarities may be observed. In both cases, a deep-seated tendency to the mystical combined with a strong sense of national uniqueness, destiny, and importance to produce an eschatological ideology that, and this is crucial, inflates time to arrive at the eschatological outcome not at a mystical “end of days” or “kingdom come”, but right now, in our own lifetime.

This acceleration of eschatological timelines requires religious reform. In Germany, a Christian country divided between Catholicism in the south and Protestantism in the north, with both versions not particularly eschatological, Christianity had to be pushed aside, replaced with an astro-turfed pseudo-ideology of Norse paganism. In Persia, the main seat of Shia Islam, Shia’s existing eschatology of the coming of the Imam Mahdi had to be brought to the forefront and made supreme over all the other teachings of the religion. In both Germany and Persia, eschatological time inflation was brought about by real or perceived slights received at the hands of powerful enemies, enemies, who, unable to defeat the righteous in a fair fight resolved to use devious and underhanded means. 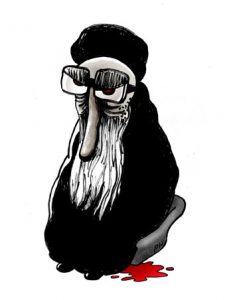 It is perhaps not coincidental that both of the Indo-European speaking cultures hell-bent on advancing the apocalypse, Nazi Germany and Shia Iran, chose the direct descendants of the ancient Semites who developed the phonetic script in which both German and Farsi are written (both Latin and Arab scripts are Ancient Hebrew/Phoenician derivatives), the Jews as their Enemy. Considering that Mohammad himself was an Arab and thus a Semite, the current anti-Arab policies of the Iranian Mullahs are both anti-Semitic and anti-Muslim, a fact that does not escape the notice of the guardians of the Sunni mainstream Islam, Saudi Arabia.

Neither 1930’s Germany nor today’s Persia, tallying up the books of their successes and failures in the real world end up in the black. Germany, far from being the preeminent Western power, was utterly defeated by the Anglo-Saxon alliance of Britain and America, with their historical rivals, the French reaping all the benefits. Persia would have perhaps been content to resign itself to the margins of history as it has been doing for over two millennia, satisfied with its religious status as the guardian of Shia Islam, had it not been for two 20th century developments: oil and Israel. Iran’s vast oil reserves opened for it new vistas of temporal power. Israel’s creation, an affront to Islam of all stripes, presented a challenge to Iran, a challenge that could not go unanswered.

The secular regime of the Shah, connected as it was more to Persia than to Islam, allowed technological development to the point where Iran could extract its oil without foreign assistance. The Islamic Revolution of 1978 brought to the forefront forces that saw in the Shah regime’s acceptance and close ties with Israel an admission of defeat. The failure of the October 1973 attack by the Sunni Arab forces of Egypt and Syria to destroy Israel made Israel’s existence in the Middle East look like a fait accompli, and Egyptian president’s Anwar Saddat’s peace overtures to Israel were about to make that a reality. Sunni Arab opposition to Israel had failed.

Crucially, the oil embargo by the Sunni Arab world in the early to mid-1970’s, while causing some major inconveniences for the West and especially America, succeeded only in stopping the import to Israel of a few luxury items and restricting Israelis choices in soda (Pepsi) and cars (many Japanese models were not imported due to the Arab embargo). The embargo failed to dent America’s commitment to Israel’s security, and thus failed in its main mission. The success and continued existence of a Jewish state in ancient Judea, a state whose self-proclaimed mission was the gathering of the entire Jewish Diaspora, a state that even then was vastly more developed and successful than all of its Muslim neighbors, flew in the face of both Christian and Muslim teachings, except in their eschatology. 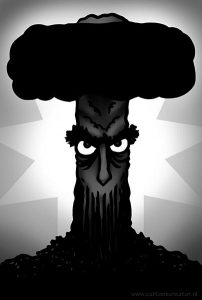 It is no secret and in fact a source of some uneasy mirth among Jews and Israelis that many evangelical Christians see in the State of Israel a sign of the coming, soon in our own lifetime, of the apocalypse, in which the righteous will be saved and the remainder… well, not so much. Luckily, this belief elicits in evangelicals a strong support for Israel, support that the writer of these lines happily welcomes. Unfortunately, Shia eschatology does not see it the same way. It sees in Jews as anything but dhimmis (second class citizens without agency) an affront to Allah and an impediment to the coming of the Mahdi. Certainly Jews in possession of all the trappings of temporal power wielded by an independent modern state do not hasten the coming of the Messiah as they do for eschatologically-minded Christians; for Shia Muslims they make it impossible.

Like the Nazis in 1930’s Germany, Iran’s Mullahs came to power by convincing most of their brethren that they would soon, in their own lifetime, correct all the historical injustices that were visited upon them. And just like in Germany, the only way that this result could be achieved was via a temporal inflation towards an eschatological denouement otherwise known as the apocalypse. In Germany’s case, the apocalypse, known as the Holocaust did in fact take place, though its results were perhaps not quite as advertised by Hitler and his henchmen. Iran’s Mullahs are now rushing towards an apocalypse of their own, a nuclear one. If they are not stopped, this apocalypse may be the last that human race will ever initiate.