Iraqi Prime Minister Haider al-Abadi reportedly lashed out at Abu Mahdi al-Muhandis, a key commander in the Hashd al-Shaabi, the Popular Mobilization Forces of mostly Shia militias that played a key role in the war on ISIS between 2014 and 2016. This comes almost two weeks after a controversy erupted in Nineveh over changes to operation deployments and command structure of the PMU. There has been pressure for the PMU to withdraw from cities and for its structure to be changed. Some minority units of the PMU will be incorporated into other Nineveh commands.

But why is Abadi suddenly speaking out? It appears that Abadi wants to assert his power as coalition negotiations continue in Iraq to form a new government. Countermanding Muhandis and PMU orders is a way to show he is in charge.

On August 24 Abadi visited with the PMU and posted on Facebook about his trip. He said that the PMU should not be “politisized.” Then he posted the statement on Twitter. It was an odd and cryptic statement. The PMU by its very nature is political. It was formed from Shia militias that were based on militia-party-religious structures. Badr, Kataib Hezbollah, Asaib Ahl al-Haq and others were rooted in political-militia structures. During the May elections the PMU backed a list led by Badr’s Hadi al-Amiri called Fatah. Amiri’s list came in second while Abadi’s “victory” list came in third.

But Abadi had been a keener ally of the militias a year ago. He didn’t flinch when they were incorporated into the security forces between 2016 and 2017. In October 2017 he even defended their role to US Secretary of State Rex Tillerson, calling them the “hope and future” of Iraq. So what happened to the hope and future? After the elections Abadi was put in an awkward situation. Although his roots are the same as Nouri al-Maliki’s hardline pro-Iran background, he has been a close ally of the Americans against ISIS. He also helped re-open relations with Saudi Arabia. Since the elections US anti-ISIS envoy Brett McGurk has been meeting with party leaders in Iraq. Some Iraqi commentators have interpreted this as the US trying to compete with Iran’s Qasem Soleimani to see who will next lead Baghdad.

This comes amid constant rumors over the last week about the creation of the “largest coalition” government that will include, depending on who spreads the rumor, either Abadi, Sadr, Kurds and Sunnis, or Amiri, Maliki, Kurds and Sunnis.

We must also recall that after the airstrike on Kataib Hezbollah in Syria in June there were tensions between KH and Abadi. The deployment of the PMU in Syria to fight alongside Assad’s forces risked bringing Iraq into conflict in Syria. This is a problem because it threatens Israel as Jerusalem claims it represents a “road to the sea” whereby Iran carves out an “arc of influence” via Iraq. It also concerns the Americans who have warned in several Inspector General reports for the Department of Defense that Shia militias are a threat to the US in Iraq. The PMU blamed the US Coalition for the airstrike.

Abadi’s current tussle with the PMU seems to be a bit ironic in that he is encouraging the PMU to stay deployed in some cities, even as the PMU wants to withdraw. The deployment of the PMU and its checkpoints have angered local Sunni citizens. It has also been a problem in Sinjar where Yazidis want peace to return so they can return to their homes. The disputes with the PMU make the area less stable. 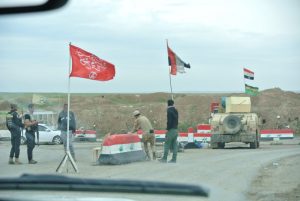 A PMU checkpoint in Nineveh in 2017 (Seth J. Frantzman)

So what happened over the weekend on August 24-25. Abadi cancelled an order by the PMU to redeploy its forces in Nineveh and Salahuddin provinces. A report argued that the disputes are related to Abadi trying to garner support from Sunni parties for a coalition, and attempts by Amiri to lure the Sunnis to their camp. The secret agreement in the background may involve removing the PMU from Sunni areas? If Amiri promised that, then attempts to move the PMU may come before the agreement is signed. Abadi is blocking that, perhaps?

Handing over these areas to the Iraqi army in theory should ensure security and stability. But the army has also not been historically good at securing areas against groups like ISIS. Therefore tribes of Nineveh yesterday expressed fears of a security vacuum after the withdrawal of the PMU forces from the province. A report quoted “The spokesman of the ‘peace Saraya’ Safa Tamimi confirmed yesterday, the presence of brigades in Samarra (Salah ad Din) and not to withdraw from their positions.”

The Kurds are also playing a role in this because many Kurdish politicians want a return of Peshmerga to either Kirkuk or Sinjar, or both. These are areas the KRG lost in October 2017 to the federal forces and PMU. One source wrote to me, “The political scene is very complex in Iraq in the event of non-intervention of the coalition countries support the Kurds will not be able to recover half of the land they lost during the occupation of the Iraqi army and the Iraqi army Kirkuk, Sinjar, Tuzkhurmatu and Khanqin areas of constitutional Article 140.”

The question is what is Abadi up to and whether he can succeed in torpedoing a coalition led by Amiri. If he can’t, Washington will lose faith in his abilities and he will have squandered all the “victory” that he played a role in over the last few years.

Obama Used The Erdogan Tactic On The US Military