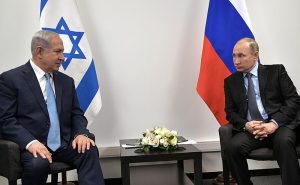 Israel Prime Minister Benjamin Netanyahu is heading to Moscow for the May 9th Victory Day Parade. Netanyahu’s attendance will be a symbolic and important show of support for Russia and a reminder of the close relations he enjoys with Russian President Vladimir Putin. On the surface he is going because hundreds of thousands of Jews fought in the Red Army to defeat Nazi Germany. But the deeper reason is because of concerns over Iran’s presence in Syria.

In April tensions between Israel and Iran reached a peak. As Reuters notes: “When Moscow condemned an April 9 strike that killed seven Iranian personnel, and blamed Israel, it set off speculation in Israel that Russian patience might be wearing thin.” Then there was the massive air raid on April 29 on positions near Hama. The full details of this raid are not known but like other recent strikes, the raid it apparently led to the deaths of Iranians or Iranian militia in Syria. Since a drone penetrated Israeli air space in February there have been strikes targeting not only drone operators but ground to ground missiles in Syria.

Israel continues to warn again and again about Iranian bases in Syria. Sometimes this coincides with satellite photos of the bases. Israel’s Defense Minister has also called on Russia for support. In addition Iran continues to publicly threaten Israel with retaliation. The latest reports on May 6, 2018 are Iranian threats to target Israel with a missile barrage from Syria. That report may also be a message to Moscow and Damascus to see if they can rein in Iran before it is too late.

Netanyahu and Putin, Turkey and Moscow

The Netanyahu and Putin relationship is a unique one. It dates back many years but it has grown in the last few years as Israel realized that US policy in the region was not consistent. Israel’s main red line has been Iranian encroachment in Syria. This has increasingly become an issue as the Syrian civil war has changed form since 2015. Once it was clear Assad would remain in power, Israel knew it would be dealing with an Assad regime that it was familiar with. But the regime would be much weaker and relying on Russian air power and Iranian-backed militias, as well as Hezbollah. So the old Assad regime was no more. The new regime after 2015 was a hybrid one. In many ways this less stable regime relying on Iran was more dangerous to Israel. The old regime, despite claiming to be part of the “resistance” against Israel actually kept the peace on the Golan. Even after Israel’s attack on its nuclear reactor in 2007, the regime was silent.

Netanyahu responded immediately when Russia began intervening more in Syria in 2015. He understood the balance had changed and he didn’t want a “misunderstanding” in the skies over Syria. In fact Israel’s former air force commander later admitted in 2017 that Israel had carried out 100 airstrikes in 5 years in Syria.

Russia’s role in Syria after 2015 has not merely been to bolster the regime, but also to freeze the conflict through a series of de-escalation zones. The goal has been to get the regime breathing space. So ceasefires have been signed or agreed. In July 2017, for instance, one ceasefire signed between Jordan, the US and Russia dealt with southern rebel-held areas. This is all in the regime’s favor. The regime was able to clear ISIS from the Euphrates valley and link up with Deir ez-Zor in the fall of 2017.

Then the regime set its eyes on dealing with eastern Ghouta and rebel areas near Hama in 2018. One by one those rebel pockets have fallen and the residents and fighters have been bussed north. As the Syrian regime benefits from this de-escalation and ceasefires, Turkey becomes more important to Russia. Russia sought to make gains by working with Ankara and playing on Ankara’s anger over the US support for the SDF in eastern Syria. Turkey closely coordinated its Afrin operation in January with Russia. For the regime the calculation made sense. The US and its allies would lose, Turkey would gain but Damascus would get back eastern Ghouta in exchange. This made sense. It made sense to Moscow as well.

For Russia the main interest is not only keeping Assad in power but also reducing instability in Syria and creating a “frozen” conflict. Russia doesn’t mind if Turkey remains in northern Syria for now. The idea is that the regime must be strengthened and it needs breathing space after seven years of war. So the concept is that Russia can meet with Turkey and Iran frequently.

If Russia appears to have a unique relationship with Netanyahu, it also has carved out a unique relationship with Erdogan as well. Moscow benefits here by making inroads in two key US allies, one of which is a NATO country as well. But it’s about more than that for Moscow. Russia has differences with Israel and Turkey on certain files and issues. But it has commonalities as well. And Russia is seeking outreach throughout the region, in places like Egypt and Saudi Arabia.

Is this all about stability or purposely working with Western allies in the region. All of these countries (Turkey, Egypt, Saudi Arabia and Israel) have lost some faith in US policy in the last years. Israel was angered by the Iran Deal and the feeling that the Obama administration would do everything to court the Ayatollahs. Saudi Arabia was also angered by the Iranian welcome mat in DC. Egypt felt that Obama had supported the Muslim Brotherhood. Turkey thinks Washington has sided with the YPG-SDF (which it views as the PKK) in eastern Syria. So each for their own reasons see Moscow as more stable and reliable. With Trump in the White House all these countries thought there might be a new day in 2017. But each has continued to hedge their bets. Russia too believes in realism and sees these relationships through interests.

Russia thinks that a stronger Syrian regime could be weaned of reliance on Iran. Russia and Iran are on the same side in Syria but they do not see eye to eye. The question for Israel is where the red line for Moscow is when it comes to air strikes in Syria. Does Moscow quietly think it’s fine if some Iranian influence is rolled back?

Another issue for Russia is whether Israel’s airstrikes appear humiliating to the regime and whether they might threaten the regime at some point. In April it appears Israel sent a message to Russia, Assad and Iran via reports that any Iranian use of Syria to attack Israel would result in threats to Assad’s regime. Obviously Russia does not want that. It wants Damascus preserved at all costs. So the question is clear: Will Russia send a firm message to Assad that Iran must not wage war on Israel from Syria? At what point would Russia seek to interdict attacks on Syria if it felt the regime was threatened?

Since the beginning of 2018 some of these questions have been partially answered. Russia has sent some mixed messages in this regard. In one headline a Russian official said Moscow would stand by Israel in the event of an Iranian attack. In addition Netanyahu continually makes it clear to Moscow that Israel will act against any Iranian attempts to attack Israel. In February a report noted “Diplomatic sources said Israel was in contact with officials in Moscow, seeking to convey a message to Syria and Iran that though it had landed a heavy blow in response to the drone incident, it was not interested in further violence.”

This is the high stakes game taking place now. Russia is critical of rumors the US might withdraw from the Iran Deal. In addition it fears the withdrawal would lead to instability. In this context Russia expresses doubt about certain claims by Israel regarding Iranian penetration of Syria. Conveyed via media it has doubts about Netanyahu’s stories of “Iran lied” and even about the Iranian drone attack in February. Sputnik even has a whole list devoted to Israeli actions in Syria in 2018.

So what happens if the US withdraws from the JCPOA and Iran seeks to retaliate against Israel. Speculation points to greater tensions after the Lebanese elections. Hezbollah wanted smooth sailing before the elections in case of tensions with Israel. Iran is also concerned about elections in Iraq. That points to issues arising after May 15th. The US is also moving its embassy in May, which will add more reasons for tensions.