One of my all-time favorite places to spend a summer afternoon in Boston is the Tremont Street bar just opposite the Granary Burial Ground on Beacon Hill. The bar itself is nothing special, just a run of the mill tourist trap. But I like to sip my Sam Adams and watch the old tombstones of Bostonians who died in the early to mid-sixteen hundreds as hordes of sweaty tourists pass them by with their love handles and their shopping bags with nary a glance in their direction. And yet we owe everything to these men and women lying there under the grey granite headstones, their engraved names all but lost to centuries of weather and lichen. The American South was more South America than the America we know today. With its plantations and its long lazy summers and its chivalry and its grandeur. No, it was the Yankees that made America what it is today and no place is more Yankee than Boston. Or was, anyway.

Without those lying six feet under the green manicured grass, there would be no America, and without America there would be no freedom and no prosperity. With their ingenuity, their amazing work ethic, their piety, their dedication to building the Second Jerusalem, they dragged a wild continent from obscurity to amazing heights of human achievement. With their disdain for bondage and slavery and their willingness to sacrifice their lives to rid America of this scourge, they cemented her legacy as a shining beacon of freedom for the whole world. Without them, the Nazis would have conquered the Soviet Union and completed their annihilation of the European Jewry, parents of yours truly included. Even if the Soviets had managed to somehow prevail, I would be still rotting away in the USSR, as it was America that forced the Soviets to let my people go in the seventies. Without the labor and legacy of these austere New Englanders, America would now be South America with its ongoing poverty, corruption, rampant racism, and wholesale environmental destruction.

Elizabeth Warren, the senator from Massachusetts, comes from these amazing people and yet she chooses to besmirch their legacy, vilify their memory, and steal the identity of a people to whom she most certainly does not belong. Why is she doing this? The simple answer of course is that she is a cheater; early in her career she chose to game the system that was already gamed to hurt certain ethnic groups (Americans of European descent, Asians, and Jews) and help others (African and Native Americans). In order to do that she elevated a family anecdote she may or may not have heard about some Cherokee bloodlines into a full-fledged self-identification as a “woman of color”. This trick proved to be a success, until such time as her political profile gained national exposure and the original “boy who cried that the king had no clothes” was elected president in the person of one Donald J. Trump. Warren had correctly calculated that no Republican would ever call her bluff on her self-serving ethnic misappropriation. She had not counted on Trump.

Pocahontas, the nickname Trump had given her highlighting her stolen “valor” as a pretend member of a Native American tribe that has suffered much at the hands of white Americans just like her, combined with the highly publicized racial discrimination against Asian Americans that is routinely practiced by her alma mater Harvard, began to take hold. She had to do something. In doing that “something”, she has proven that she is more European and less Native American than most Americans of European descent. It is far from certain that she has even a fraction of a percent of Native American DNA, but let’s stipulate, for the sake of argument, that she does. How had that come about? Were there “love affairs”, Captain Smith and Pocahontas-like between European settlers and Indians? Maybe. A few. But for the limited amount of time, in most cases less than a century, that settlers and Native Americans came into close contact, neither group encouraged mixed sexual intercourse. Such intercourse that did take place, was more likely than not, on both sides, non-consensual. Women, whether white or Native, were forced to have sex with men of the opposite side. In other words, they were raped.

According to her own narrative and that of her party, Warren comes from people who, rather than being the exceptional role models that they were and deserving of our everlasting gratitude, were usurpers, colonialists, racists, misogynists, and religious fanatics. Their descendants, Warren among them, are over-privileged not because of their ancestors exceptional daring, hard work, and self-sacrifice, but because they looted and pillaged and stole the bounty of America from its aboriginal inhabitants. Warren fully supports every act of mea culpa that is now being forced down the throat of white Americans, whether they are rich or poor, whether their ancestors landed at Plymouth Rock or Ellis Island. She supports it, that is, only in so far as others have to pay the price, not her. She, whose ancestors did in fact oppress, infect, and exterminate the entire Native American population of New England, she, whose at best potential, improbable, and miniscule amount of Native American DNA had likely infiltrated her genes via one of her ancestors violently raping a Native American woman, chose to knowingly and consciously avoid paying the consequences of her own political ideology and her tribal identity as a full-fledged, card-carrying member of the TRIBE OF THE OPPRESSORS, by assuming a fake identity as a member of the Tribe of the Oppressed.

No, she would not be paying the White reparations she and her party have designed and implemented; not for her are the adverse personal consequences of her own virtue signaling. No, the first generation Vietnamese immigrant whose parents wasted away washing dishes in Boston’s Chinatown so she could go to a private school, and take SAT classes, and violin classes, and play competitive tennis, all so she could apply to Harvard only to be turned down because of her genetic makeup, that’s who, according to Warren should be paying for her own ancestors’ alleged bloodlust, and greed, and debauchery.

It is difficult to imagine the depravity of a human being who, having been handed down by their own ancestors the amazing privilege of being born in America to a well-established family, decides to spit in their collective faces by declaring them to be vile colonialists, genocidal maniacs, racists deserving of nothing but contempt and oblivion in perpetuity. How can one fathom the depravity of someone who fully supports the punishment of people living today, none of whom can possibly bear the slightest responsibility for the suffering of the non-Europeans in America, only to then lie and cheat to become exempt form that same punishment? 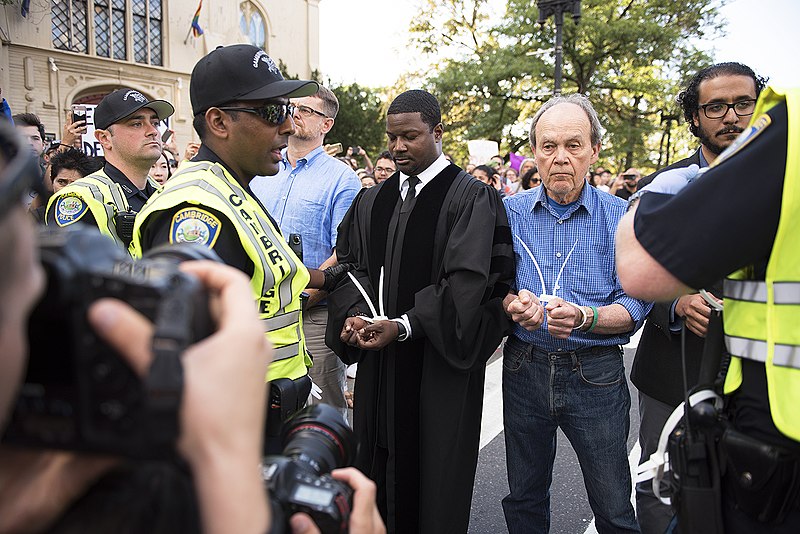 Image by SOG32
Harvard Professor Jonathan L. Walton with more than 30 fellow faculty members during a protest in Cambridge against of the repeal of the DACA program

There are ways to help, support, and elevate those Americans, who, regardless of their DNA, can benefit from such support. There are ways of doing so without pushing down on other, more fortunate segments of the American population. Warren’s ancestors lying on Beacon Hill never saw the world as a fixed pie, they always sought to expand, to grow, both in spirit and in worldly goods. They were a product of their time and their culture. Like all European Christians of that time they did not consider Native Americans, or Asians, or Jews to be their equals. That doesn’t make them any less great; it takes nothing away from their crowning achievement of making the world a better place for everyone. Alas, Warren and her ilk do not follow in their footsteps; less for you more for me is their modus operandi, vindictiveness is their mother’s milk. Nastiness, dishonesty, cheating, race-baiting, are not the American way. Hard work, fair play, lending a hand to those in need until they can do it themselves, those are the values of America’s founders. Those are the values we must get back to so that the Pilgrims can sleep in peace once more.