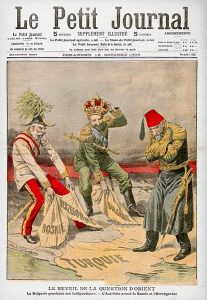 The European Union started as an economic agreement years ago. But today, it is much more than that, and based on multifarious principles – political, ideological, judicial, moral, etc. This makes it harder for small countries to join.

For the majority of Albanians, efforts to join the EU are logical. Albania has always been part of Europe, sharing even its Christianity since ancient times.

But even for the minority, the EU’s doubts on opening its doors may be perceived in the same way–being a small and less developed country, and having a majority Muslim population since the 15th century, makes Albania undesirable to join the West. And of course, the responsibility for its backwardness is mainly of Albanian politics itself, before and after the 1990s.

Being a communist country for almost 50 years made Albania a European outcast. The West has always blamed the communist political regime that kept the country isolated from the developed world. If we look back on history, there have been only one or two occasions in which Mother Europe praised or embraced Albania’s efforts. Most notable, during the war with the Ottoman Empire in the 15th century, when the Albanian national hero, George Kastrioti Scanderbeg, protected the West from the Ottoman conquest, by fiercely fighting against the Turks. Was it mere interest? Because, what followed after in the 20th century, was Albania’s division among neighbouring countries, making it weaker and poorer.

What about after the 1990s? For 30 more years, the West has continued to keep Albania beyond its fence. The reasons? None of them logical. Today the country shares the same democratic format as the rest of the EU. But, they say Albania has crime, corruption, drugs, and political and economic instability. As if such problems do not exist in the developed world… on the contrary. Evil is breeding in the EU with every passing day, according to analysts. The Mafia in Italy, the economic collapse of Greece, the presumed corrupt politicians of EU countries, like Berlusconi and Sarkozy, just to name a few. The organized crime in the Union (according to Western media statistics, up to 40,000 criminal groups), and the fact that drugs have been legalized in some EU member countries are points of note.
But for Albania, all these types of problems are considered barriers, even just to open negotiations.

Does it mean such evils can be tolerated, if the country is big, powerful and influential?

There is a double-standard in the EU’s attitude and is recently clearly witnessed. There have been times in the Albanian post-communist period, when Europe has tolerated or minimized some of the most essential demands for EU integration, like violation of freedom of speech or free elections. Analysts maintain there have been notorious cases like, 1996, 1998 or 2009’s events in Albania, in which the West has not focused on the governments’ violence, irregularities and corruption. If the EU had acted differently, Albania would be steps forward now.

Today, there is a high level of scepticism and a lack of confidence on the part of some European MPs, mostly German, who state Albania is not ready to be part of the Union. They are mostly the same long-time anti-Albanian foreign politicians, supported by anti-Albanian native politicians. And they know very well that their statements and actions do not damage just the governments, but the future of the country and its people.

With no doubt, seeing the bureaucracy and hypocrisy of Europe, other countries outside the EU are surely trying to exert their influence in Albania and in the region. Why should Albania refuse Russia, Turkey or China’s cooperation, support and investments, as long as the Albanian territorial sovereignty is not touched?

The EU points its finger at the establishment of democratic legal societies in all West Balkan countries, but Albania and the region also need jobs, infrastructure, better welfare. However, if these countries accept big investments from the East, Europe gets alarmed. Isn’t it time the EU chooses whether to hold or let loose Albania…and the other Western Balkan countries?

Yes, it is the time EU opens its doors to Albania, not because of the East’s influence, but because it belongs to Europe.

What was the purpose of the Russian Patriarch Kirill’s presence in Tirana last weekend? Of course, to further strengthen the ties with the Albanian Orthodox church…but not just that. He came to Tirana at a very crucial moment for Albania, amidst EU polemics regarding the start of negotiations, to show that Albania may have another alternative if European scepticism continues and its doors do not open in June. Through his meetings with the Albanian PM and President, he assessed improvements and stated he was impressed by the good changes. His visit was the second biggest one paid by a Russian leader in Albania, after that of Nikita Khrushchev 60 years ago. Russian influence is still big in the region and the EU knows this. The same steps are followed by Turkey and China, mostly through investments.

So, if EU wants to preserve only its union myth in the region, without taking concrete action, then the reality will show otherwise.

The Biden Push For War In Ukraine Is About Stopping US Mid-Term Elections, And Giving China Taiwan