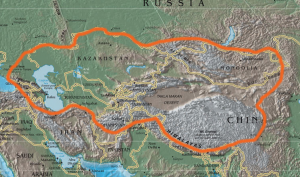 The West cannot solve the problem of Afghanistan alone. America and Europe can treat the symptoms, but they can stave off the absolute disaster for a period of time, at the cost of much blood and treasure. However, they cannot solve the underlying condition – a mix of radical Islam, tribalism, and underdevelopment, which bleed the country year after year. Only Afghanistan’s neighbors can actually do something about this tribal no-man’s land. Only nations of the region can calm the animal spirits of the tribes in the mountains of Central Asia.

Today a relatively moderate Afghanistan government headed by President Ashraf Ghani is fighting for its life against the Taliban supported by Pakistan, and ISIS. This is after the Obama Administration reduced troop levels and left the people who risked their lives to bring forth a new Afghanistan in the line of fire.

U.S. still have troops in South Korea, Japan, and Germany for a reason—to provide stability. American troops will be in Afghanistan for a long time, but they cannot lift the heavy load by themselves. It seems an impossible task.
What needs to happen is a massive effort to bring the Afghan warlords out of the Middle Ages and into the 21st century. America has already spent its trillions; the towering national debt will of about $20 trillion precludes further massive spending on nation-building. The effort to save Afghanistan has to come from nations of the region who have much to gain by a prosperous and modern Afghan state, including a trade partner and a transit route from the landlocked countries in the heart of Eurasia to the Indian Ocean.

It seems the Trump Administration has grudgingly made an open-ended commitment to the war-torn country. It is crucial for the world to continue to help bring peace and to tackle poverty for the benefit of the people of Afghanistan, the region and the world. The question is—how best do this?

In addition to defeating the Taliban and ISIS, Afghanistan will need to come to some type of political arrangement. It will also need a long-term reconstruction. It would be unforgivably shortsighted to forget the Afghan people for the second time.

We closed our eyes to the instability and despair in the country once already, after the Soviets left in 1989, and it brought us September 11th. Afghanistan is where Al Qaeda planned the attacks, safely ensconced in its terrorist haven.

The main thrust of President Trump’s foreign policy is America first. The United States’ national interest is paramount. We definitely have a need to make sure Afghanistan doesn’t turn back into an anarchic haven for warlords. The other facet of the emerging Trump doctrine is burden sharing.

One country that has taken a lead on the Afghanistan reconstruction is Kazakhstan. Astana remains committed to giving a higher profile to the continuing plight of Afghanistan.

Those who are willing to help need to be encouraged – and thanked. Kazakhstan wants to help — I say let them help.
Astana is already providing bilateral assistance to help rebuild the country’s infrastructure, to train its police force, and to educate its youth. Kazakhstan is also determined to build a successful regional economy, so that a peaceful Afghanistan should be fully integrated, providing the engine to lift its people out of poverty.

China has shown an interest in Central Asia and is providing a long distance port for Kazakh goods; there is no reason Kabul cannot provide a route for goods and commodities from the region to Pakistan and India. The Belt and Road project of President Xi Jinping is pulling the region kicking and screaming into the modern trade and investment-based economy.

Kazakhstan Railways (KTZ) is also eager to engage in developing railway infrastructure in Afghanistan. The Iranian Chabahar port, and the Pakistani Gwadar both are quickly becoming the central gateways to the Indian Ocean, and for trade with India. Especially for Gwadar, a peaceful Afghanistan is a must.

Kazakhstan is a natural partner of the U.S. in dealing with Afghanistan. The new 2017 U.S. National Security Strategy states the U.S. “will work with the Central Asian states to guarantee access to the region to support our counterterrorism efforts”. Strengthening the strategic partnership with Kazakhstan may provide geopolitical advantages for the United States. With its seat on the U.N. Security Council from 2017-2018, and the Council presidency in January 2018, Astana is pushing to help galvanize international efforts, and, in fact, organizing a ministerial level debate on Central Asia and Afghanistan later this month.

Kazakhstan could be the bridge between Afghanistan and the modern world for the U.S., which is looking to continue its presence in the region for some time. A key component of the Northern Distribution Network, Kazakhstan has provided a secure route for American forces in and out of the Afghan theater since 2001 and is eager to continue to help going forward.

President Trump is to meet with Kazakh President Nursultan Nazarbayev in the coming days. It seems America has a natural partner to help rebuild and stabilize this country. The concept fits right with the Trump doctrine, and Washington should take Astana up on the offer to secure and develop Afghanistan.

Taliban Hopes For Afghan Peace Deal By End Of January

The Hi-Tech Traditionalist: It Is Globalist, Multicultural Policies That Are Enabling The Rebirth Of Anti-Semitism…Government Must Work For All Americans, Or Beware The Inevitable