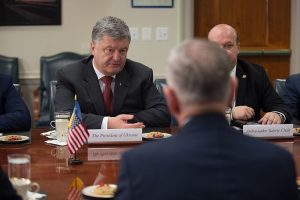 I wrote an article three years ago that basically stated Ukraine was not our fight, no matter how much we want to support people who are fighting for freedom from Russia. Anyone who advocates to spend American blood and treasure on the breadbasket of Europe simply has no idea of history and the consequences it can have on the future. Russia will never allow Ukraine to be completely out from under its influence. Moscow simply doesn’t believe it can survive with Ukraine as a part of NATO.

American men and women dying on Ukrainian soil is a folly of biblical dimensions.

So with that said, what is our new President Trump doing in Ukraine?

The administration has appointed a new envoy to deal with the Ukrainian crisis. Kurt Volker, an old hand around Washington national security circles, has been traversing Europe and meeting with interested parties in the conflict in Donbass. This week, he issued what one could call an ultimatum to Russia—make a decision to withdraw from East Ukraine, or else.

The exact quote was, “The relationship between Russia and the U.S. is important, and it’s going to be crippled by this problem in Ukraine.” He also intimated that “Russia was going to have to make some fundamental decisions” about its role in Donbass.

Mr. Trump’s secretary of Defense, Jim “Mad Dog” Mattis, recently traveled to Kiev, watched NATO troops march in a Ukrainian Independence Day Parade, and said “Have no doubt, the United States stands with Ukraine … and we will not accept Russia’s annexation of Crimea,” and hinted that the Trump administration was looking to provide lethal defensive weapons to Ukrainian troops fighting pro-Russian separatists in the east. He added when asked about Russia’s reaction to such a provocation, “Defensive weapons are not provocative unless you’re an aggressor.”

While Mad Dog’s assessment of the situation in the east may be correct, that still does not justify starting a war between America and Russia over Ukraine.

All of these developments would leave the average observer to believe the United States is well on its way to a fight with Moscow. To this end, I would say that the death of the Trump foreign policy he laid out during the campaign, especially in dealing with Russia, is greatly exaggerated.

This week, The Washington Post of all places, admitted with a front-page article Black-clad antifa members attack peaceful right-wing demonstrators in Berkeley. In one fell swoop, the media narrative that Mr. Trump was a racist and his comments and news conference after the Charlottesville murder was an example of our president supporting white supremacist groups, was destroyed.

Mr. Trump was right, once again.

Once again, the media, the Republican Establishment, the Marxist Left, all underestimated Donald Trump. Once again.

How many times has this been? I can’t even count how many times the #NeverTrumpers cried the sky was falling, or the bleating media crowed the Trump presidency was over.

I think the world is underestimating Donald Trump again when it comes to his current policy in Russia.

Mr. Trump is nothing but a negotiator. I think he is negotiating now. Yes, the tired old cliche that we are seeing the “art of the deal” is very apropos. Mr. Trump thinks way ahead. He manages situations in advance and is patient in letting the eventual outcome he knows is coming play out. This is how he operates.

I think we are simply seeing a hard line shown to the Kremlin prior to a deal being cut. Mr. Trump likes to operate from a position of strength. He likes to be able to have cards on the table to deal away if he needs to. It is a completely different strategy than the incompetence and weakness of the Obama administration. Those who remember President Ronald Reagan may recognize it. Those who are too young simply have never seen it.

No, I don’t think we will have a war with Russia. However, President Trump will stand up for our security, our interests and our allies. He will not appease. But he will cut a deal, one that is good for America.

This is what I expect will happen in the long run. We are experiencing a reset of the global chessboard, one in America’s favor.

No American men and women need to die for Ukraine. Think of Russia arming Texas against the United States. That is how Moscow sees it. We can help them, maybe even covertly. However, a war with Russia over its “near abroad” is simply unacceptable.