In a Tweet on October 3 Iran’s Supreme Leader Ayatollah Khamenei victim-shamed victims of sexual assault in an attempt to manipulate the current popularity of “me too” in the West and advance what he terms the importance of “hijab.”

In the tweet he writes of the “disaster of sexual assaults on Western women, including incidents leading to MeToo campaign, and Islam’s proposal to resolve it.” He then links to a longer propaganda article about how “Hijab can save Western women.”

The video puts emphasis on Aly Raisman, the US Olympic athlete and other victims of abuse at the hands of gymnastics doctor Larry Nassar. He has received hundreds of years in prison for his crimes. But in the video Khamenei uses the victims as one example of why “by introducing hijab, Islam has shut the door on a path that would lead toward such deviation.” This is victim-shaming at its worst. The implication is if that if only the athletes, some of them young victims in their teens had covered their hair then they would not have been targeted by the doctor?

This is shameful exploitation of victims to advance Khamenei’s cause. It implies that the victims are the problem and how they dressed is the problem.

In the article the Iranian regime leader links to, he notes ” By ignoring hijab and failing to cover what Allah the Exalted has asked them to cover, women undermine their own dignity and value.” He goes on to note, “they condemn us for having made hijab obligatory. Our laws are all attempts that we have made to preserve women’s honor, but their laws are there to disrespect women.” 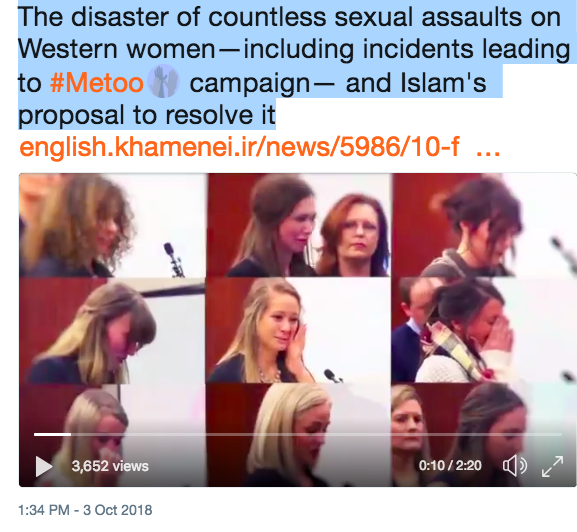 He continues with more mansplaining. “Hijab is a means of providing security: by observing hijab, Muslim women provide security both for themselves and for Muslim men. Wherever hijab is taken away from women, wherever they push women towards bareness and nudity, security is taken away primarily from women and secondarily from men and the youth.” He claims that if covering up women is “not observed, the society will be afflicted with the same depravity that the West is plagued with today.” 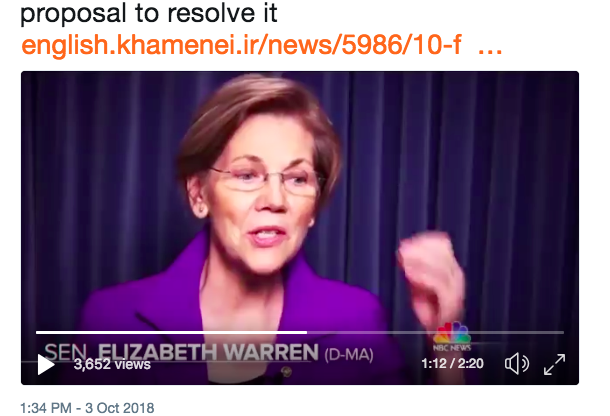 In the video he shows images of Harvey Weinstein and also a variety of female politicians from the West who have suffered harassment or assault. The Iranian regime includes an image of Elizabeth Warren. The Senator has been outspoken about sexual harassment. She told one interview “I’ve introduced a bill to say publicly traded companies should have to disclose how many sexual harassment claims they have settled, and for how much money. ”

The video ends claiming that women with hijab have “freedom and identity.”

But Khamenei manipulates her outspoken passion as a way to argue that women should cover up and be “modest” and that this is the solution to “me too.” The video concludes with images of women in black headscarves and claims that “hijab gives women freedom and identity.”

The bizarre and failed attempt to victim-shame shows how out of touch the Tehran regime is but it also shows its desperate attempt to try to exploit and tap into western causes. It wants to channel Me Too and other issues in the West and turn them into a “win” for Tehran. 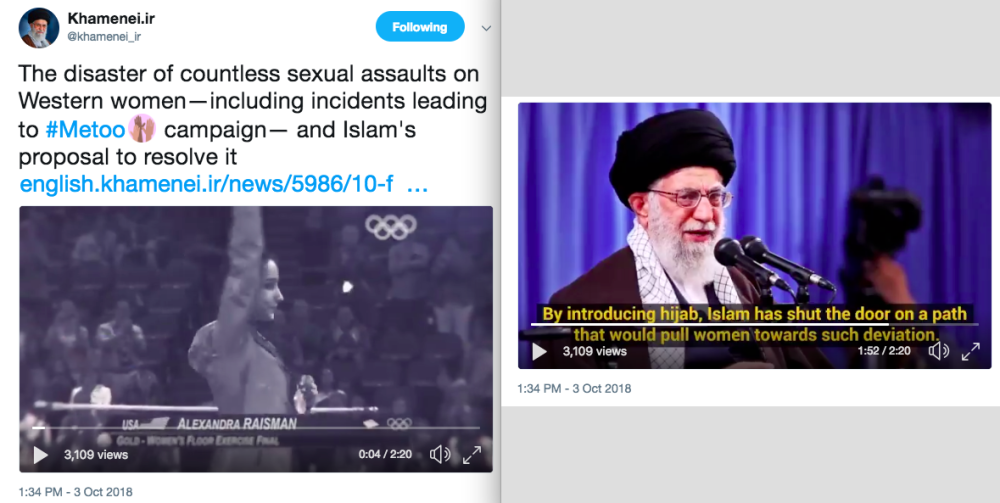 Hopefully this video shows the reality of the regime that is not moderate but far-right and which seeks to shame victims and use their images and their abuse to advance Tehran’s interests. It also illustrates the worldview of the regime, which sees every victim as the problem. Why were young teenage athletes used as an example of stopping “this deviation.” Notice the image of the perpetrator doctor is not used. In the view of this regime it is the victims that need “hijab” and “modesty”, not the perpetrators. And this is a window into this worldview. In trying to tap into the awakening in the West that is taking place confronting sexual harassment, the Tehran regime has betrayed its own mansplaining worldview.

China’s Economic Warfare Is Just As Deadly As Kinetic Aggression

Belarus Urges Moscow To Exclude “Bookkeeping” From Relationship With Minsk