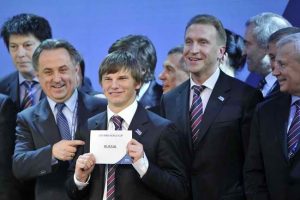 Finally let loose after a year-long diet of international friendlies, hosts Russia roared their World Cup intent to the rafters on Thursday with a 5-0 tournament-opening win over Saudi Arabia.

The Russians served up an adrenaline-fuelled performance for an 80,000-capacity Luzhniki crowd which included President Vladimir Putin and the Saudi crown prince.

The Saudis, ranked three places above Russia at 67 in the world rankings, played some nice, tight football at times, but were never able to match theRussian hosts for energy or intent…

Russia’s ‘Sausage King’ Murdered In His Sauna With A Crossbow

Russia Unblocks Telegram In Surprise Move…The Question Is Why?