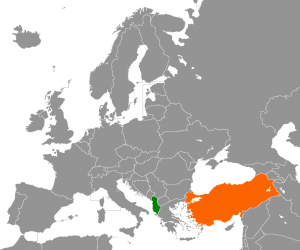 It does not seem to be a coincidence any more that many Albanian politicians, who have to face justice in Albania for committing crimes, find shelter in Turkey.

An analysis from Dita newspaper throws light on the facts, regarding the inter-institutional relationships of trust between the two countries, whatever government has been in power. There are a lot of stories of criminals escaping to Turkey, including well-known names that have fled Albanian justice. The list is long and all have found a safe, temporary place to live in Turkey, until their judicial situation was solved in a corrupt manner.

Dita mentions some important names, like the former communist leader after Hoxha’s death, Ramiz Alia, who after being overthrown in 1991, went to Turkey, allegedly to be cured of health problems.

The same for the former Head of the Albanian Secret Services during the 1990s, who fled the country after being accused of many crimes and unresolved disappearances.

Recently, another notorious name is that of Izet Haxhia, former bodyguard of DP’s historic leader Sali Berisha, who asked for political asylum in Turkey 12 years ago, after being sentenced for the murder of DP’s MP Hajdari. Hajdari’s murder has remained a mystery for many years. Haxhia has always pleaded innocence and now, under the vetting process, he has decided to cooperate with justice and is ready to give his testimony on many unresolved judicial cases against his former employer, Berisha. He was deported from Turkey a week ago and it is expected a lot of truths will come out.

Now we come to the latest escape, the former head of prosecution office, Adriatik Llalla, supposed to be in Germany, where his family lives. There is evidence that he is now in Turkey to get medical treatment. But many allege that he is there to ask for political asylum. The Turkish itinerary of the Albanian former prosecutor seems enigmatic. No one knows for sure how and why he is in Turkey. A couple of weeks ago, the media reported he was in Germany under arrest, ready to cooperate with justice for all his corrupt and criminal activity in closing many important files, in exchange for his political asylum. Now, he turns up in Turkey. According to Dita, there is evidence that he has been welcomed by the Turkish institutions, who are ensuring his safety; a special unit safeguards him.

Why did he leave Germany for Turkey? Of course, the answer is not difficult. After he became persona non-grata in the US, his receiving political asylum from an EU country would have been more difficult, if the US asked for his deportation to Albania. In the meantime, there are no obligations for Turkey towards the USA, if we take into consideration the aggravating situation between the two countries, after the US did not deport the Turkish officials accused of taking part in the 2016 coup d’état, Gulen among them.

In three days, there will be a judicial session against the former Head of Prosecution Office, Llalla, in the framework of the vetting process. Llalla will not be present, but will be represented by his legal attorney, who has handed over his proxy in Albanian and…..in Turkish, another hint that the Albanian former head of prosecution should be in Istanbul, protected by the big state that tries to remain dominant on the Balkan peninsula.

Trump To Attend Signing Of Agreement Between Kosovo And Serbia