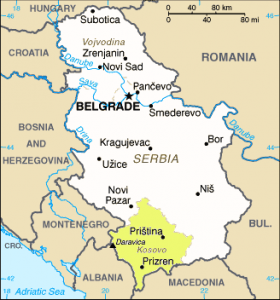 The situation is tense regarding the final phase of the Kosovar-Serbian dialogue for normalization of relations that is expected to be held in June. Recently, the presidents of both countries have addressed this critical issue with varying degrees of confidence for a final solution.

Kosovar leaders appear more optimistic. They know Serbia’s EU accession depends on the dialogue with Kosovo and they feel convinced that they will continue to have EU and US support.

A couple of days ago, on his visit to Austria, Kosovar President Thaci sounded convinnced their efforts will go forward and there will be a compromise. According to him, both countries should help their respective people to achieve this historic reconciliation, that there is no other way out, otherwise Kosovar-Serbian relations would be stuck and extremist and nationalistic forces will intervene to ruin all the progress so far. He assured that all political parties in Kosovo will remain united in finding a permanent solution to the issue. However, in order to achieve a successful dialogue, Kosovo is asking for stronger engagement from Brussels, by investing in resources, people and time to close the chapter. Seeing the great interest on the part of the US to help the Balkans, Thaci called on Washington to further engage with the issue. In the end, he believes they will find a favourable solution, measured not only in kilometres, but also in progress for a future integration into the EU, offering safety and possibilities to Kosovar Serbs and an equal position for Kosovo in the UN family.

Kosovo therefore seems ready for a final dialogue and compromise regarding an agreement and in improved relations with Serbia, hoping to conclude a legally binding agreement within 2018.

The Serbian camp is more chaotic. Recently, there has been tension within Serbian politics regarding the Kosovo issue. Serbian President Vucic has accused previous governments of throwing the country into an “abyss”, sealing Kosovo independence.

Furthermore, he has attacked everyone – Kosovo for bringing unrest and fear among the Serbs in Mitrovica, Northern Kosovo, concerning Ivanivic’s murder, and the international community for taking time for an agreement that does not exist. According to Vucic, it is difficult for the West to come up with a new proposal. What would suit Serbia would be a portion of Kosovo, but the EU and the US do not support such an option and Serbia realizes that.

Vucic’s attacks also continue against US ambassador Scott, who according to Serbian media, has accused the Serbian President of state terror and insecurity on the path towards the EU. Vucic’s answer was that Serbians make decisions by themselves; Serbia is not governed by foreign ambassadors.

Will there be a possible final Kosovo-Serbia dialogue in June? It’s hard to predict.