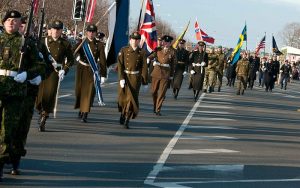 Poland is willing to pay up to $2 billion for a permanent U.S. military base within its borders, arguing that having American troops stationed there would act as a check against Russian aggression in the region.

“Permanent U.S. troops in Poland will send a clear message to Russia of U.S. support for its Eastern European allies,” the Polish Defense Ministry said in a proposal obtained and published by the news outlet Onet.

“Poland’s commitment to provide significant support that may reach $1.5 [billion]-$2 billion by establishing joint military installations and provide for more flexible movement of U.S. forces,” the proposal continues. “Together, the United States and Poland can build an even stronger bond — one which guarantees the safety, security and freedom of its people for generations to come.”

Polish officials say they’ve held talks with their American counterparts about the plan, The Associated Press reported, and that lawmakers on Capitol Hill have begun conversations with the Pentagon about whether such a base is feasible…