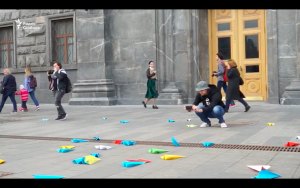 One of the members of the Russian, punk, feminist band Pussy Riot, Masha Alekhina (Maria Alyokhina), was arrested along with other protesters for throwing paper airplanes at the Russian Security Service building in Moscow in protest of the Russian government blocking the popular messaging service Telegram. They symbol for Telegram is the image of a paper airplane.

Two of the band’s members spent two years in a Siberian penal colony for performing inside a Russian Orthodox Church. They were pardoned prior to the Sochi Olympic Games by Russian President Vladimir Putin.

The arrested protesters were sentenced to 100 hours of community service for ‘dirtying’ public streets.