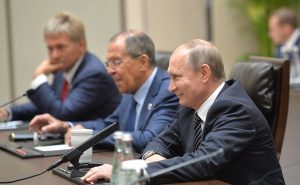 Russian Foreign Minister Sergei Lavrov declared the American military stayed away from Russia’s ‘red lines’ when attacked Syrian chemical weapons facilities earlier in the month. The United States, Britain, and France launched a total of 105 cruise missiles into the Syrian theater in response to the use of chemical weapons against civilians outside Damascus.

“They were notified about where our ‘red lines’ are located, including ‘red lines’ ‘on the ground’,” stated Lavrov, reported Russian news outlet RIA Novoste.

“The results [of the U.S. airstrikes] show that they did not cross these lines,” he added.

“I still think that both Defense Minister Mattis and Chairman of the Joint Chiefs of Staff of the US Armed Forces Dunford understand the inadmissibility, inadmissibility of any actions that could provoke a direct military clash between Russia and the United States.

“So, going back to the question of the risks of a military confrontation, I take a hundred percent of the fact that the military will not allow this, and of course, neither President Putin nor, I’m sure, President Trump, will allow this. They are still leaders who are elected by their peoples,” Lavrov declared.