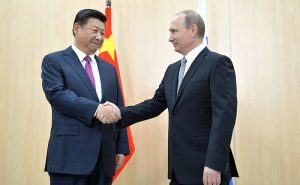 In the face of a resurgent America under President Donald Trump, Moscow and Beijing are becoming best friends forever. With Trump Maximus continuing to levy more sanctions against Russian oligarchs, and calling out China for its theft of intellectual property and unfair trade practices, Vladimir Putin and Chinese President for life, Xi Jinping, are pushing a narrative that the two former enemies are now like peanut butter and jelly.

Russia Foreign Minister Lavrov hosted his Chinese counterpart today in Moscow, as well as did Russian Defense Minister Sergei Shoigu. “We’ve come to support you,” said the Chinese representative after the meeting with the Russian military.

Russia, China Closing Gap In Fighter Technology With US

“Speaking during Thursday’s talks, Sergey Lavrov said that relations between the two nations have a “truly strategic character,” adding that they exemplify a “well-balanced and responsible approach to international affairs.” Chinese Foreign Minister Wang Yi emphasized that joint efforts by Moscow and Beijing help ensure strategic stability. Moscow and Beijing have forged what they describe as a “strategic partnership,” expressing their shared opposition to the “unipolar” world — the term they use to describe perceived U.S. global domination. Chinese Defense Minister Wei Fenghe, who also visited Moscow this week, said his trip is a signal to the U.S. of increasingly close Russia-China military ties,” reported Associated Press.

Russian news outlet Sputnik published comments by Dr. Wu Enyuan, Director of the Institute of Russian, Eastern European & Central Asian Studies at the Chinese Academy of Social Sciences, regarding the situation, with the comments obviously made for the international media’s consumption, “Taking into account the current international situation and the collective attack by the West against Russia, I believe that China, as a major power, is demonstrating a well-defined stance,” the academic said, speaking to Sputnik. “Specifically, China’s position states that until a detailed investigation [into the Skripal poisoning case] is carried out and until all circumstances are clarified, it is inappropriate to classify Russia as a criminal actor. Furthermore, such collective antagonism is a rare phenomenon for the international community; this is the path to returning to the Cold War, something China rejects.”

The reaction of Russia and China to the coordinated response to the Sergei Skripal nerve agent poisoning in England shows that Trump has rattled some feathers in the corresponding capitals, which he campaigned to do. There are reports in the media that Trump is also looking to coordinate a Western economic response to China’s trade agenda.

In the past, long-standing tension between Russia and China prevented the two nations from becoming closer, a point the U.S. played off of in relations between the two. President Nixon’s historic trip to China could be seen in this regard. Russian worries about Chinese encroachment in Siberia are well-founded.

However, it seems to two leaders have been pushed together by a common need to confront Trump and his dreams for making America great again.

Putin Invited To White House, Trump Warns Relations Better Get Better, Or Else