On Tuesday morning seven people were injured as bombs targeted a convoy with Palestinian Prime Minister Rami Hamdallah and General Majid Faraj, the Palestinian Authority’s chief of intelligence. PA sources immediately began blaming Hamas for the assassination attempt. Hamdallah said: “I’ll return to Gaza again despite what happened, the explosion event today will only make me stronger.” Images posted online showed a crater near the road and damaged cars from the convoy. 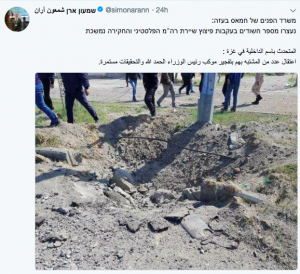 The news passed partly unnoticed in many international media, overshadowed by the firing of Secretary of State Rex Tillerson. 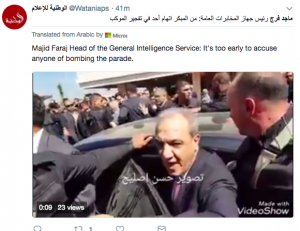 Why would someone try to assassinate the PA Prime Minister? Was he the main target, or perhaps Faraj? 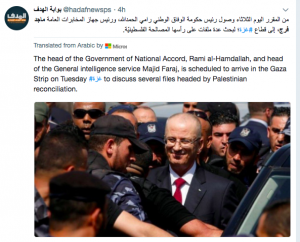 News of the convoy’s arrival was made public at least the day before. Both Hamdallah and Faraj’s presence was known. They were supposed to be discussing the Palestinian reconciliation that has been in the works since the fall of 2017. Security and other aspects of governance in the Gaza Strip were supposed to be slowly handed over to the PA after more than 10 years of Hamas rule. 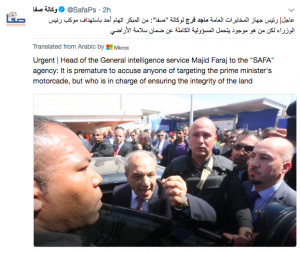 After the attack Faraj said that it was premature to judge who might be responsible. But he did highlight the fact that Hamas was responsible for security. Although reporters aid there had been several bombs, video of the incident seemed to show only one large explosion. 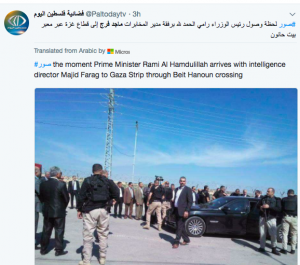 The convoy passed through the “Beit Hanoun” crossing near Erez. This crossing had put up posters celebrating the handover of crossings to the PA in November 2017. The PA leaders were supposed to be going to inaugurate a wastewater treatment plant.

Adam Rasgon notes “both Hamdallah and Faraj have traveled to Gaza three times in the past six months. Every time they went there, they were accompanied by dozens of personal security guards.” 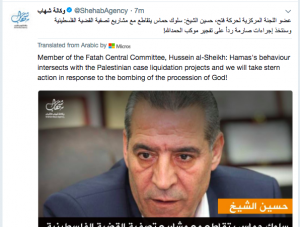 After the bombing Mahmud Dahlan, the former PA head of security in Gaza, who is a controversial figure in Palestinian politics, appeared to blame Hamas and said that “stern action” would be taken against the attackers. 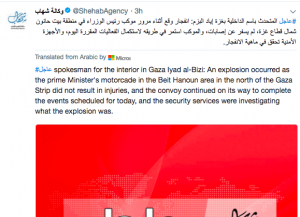 Hamas meanwhile said that they would investigate. Video later showed men digging through the crater with shovels, not exactly a high level investigation designed to preserve evidence.

Before traveling to Gaza, Faraj had been quoted as saying that the reconciliation agreement was “a trap for Abu Mazen [Abbas].”

Commentators and journalists have said the bombing was aimed at destroying the reconciliation agreement. “The failed assassination attempt against the Palestinian prime minister on Tuesday had one target — internal Palestinian reconciliation,” wrote Daoud Kuttab. There seems to be message discipline among those quoted. Omar Kullab told Kuttab at Arab News “We don’t know who is behind it. It might be the Israelis or ISIS (Daesh), but I doubt it is Hamas. Nevertheless, I think that the attitude of Prime Minister (Rami) Hamdallah is the correct one, namely to move even faster ahead with the reconciliation efforts.” Others said that reconciliation was important and that the bombing showed Hamas was not controlling security.

The “Hamas led to insecurity that led to bombing” narrative would dovetail with the reconciliation agenda since it will end with Hamas giving up security in the Gaza Strip. However the blast could be interpreted the opposite way as a way to derail the reconciliation process. Hamas officials have accused Fatah of “exploiting” the attack to blame Hamas. Some in Israeli media have blamed “salafists” for the attack. After Hamas had condemned the attack, Khaled Abu Toameh writes that Ismail Haniyeh called Hamdallah and agreed to “blame Israel and its collaborators.”

Hamas spokesman Sami Abu Zuhri has accused Fatah of using the event for its own ends. He points out Fatah is now threatening Hamas members in the West Bank and using the attack to showcase Hamas security failures.