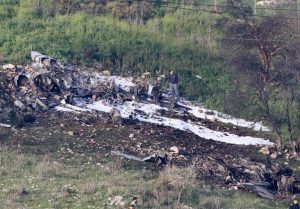 The shoot-down of an Israeli F-16 after an Iranian drone was flown into Israeli airspace last week was widely reported. The jet was part of an IAF strike package against Syrian/Hezbollah air defense targets in Syria after the drone incursion. As we have continuously reported, Hezbollah and Iran have repeatedly hinted they would turn their sights on the Jewish State once the Syrian Civil War died down. This seems to be happening. However, what is even more interesting, but not widely reported or discussed, is the flare-up of violence in the Gaza Strip, where Israel fought a short conflict in 2014 against Hamas terror.

The Russian news outlet RIA Novoste wrote Sunday, “So, the militants blew up a landmine in the way of an army patrol, wounding four servicemen. Later, they fired a missile, which, according to media reports, fell into a house in one of the border kibbutzim, but did not explode. At night in the settlements near the border, including the city of Sderot, sirens sounded, but then the army recognized the alarm as false.” Four Israeli soldiers were injured in the attack.

Israel responded by attacking 18 targets within Gaza that were said to be part of the Hamas war-making machine. “The flare-up, which started on Saturday and had died down by Sunday morning, was one of the biggest in the Gaza Strip since a 2014 war between Israel and Palestinian militants,” Reuters reported.

“We will hunt down those responsible for yesterday’s incident,” Israeli Defence Minister Avigdor Lieberman told Israel Radio on Sunday.

What is interesting to me is the timing of the incident, coming right after the violence on the Israeli border with Syria. Iran is known to be colluding with Hamas and coordinating terror against Israel from within Gaza. The coincidence seems too much to be ignored.

Arab armies are famous in the past for teaming up to attack the Jewish State. Iran may be following this example, using its proxy armies in the region.

To highlight the recent violence and declare Israel’s intention to defend itself, Israeli Prime Minister Benjamin Netanyahu held up part of the downed Iranian drone at the Munich Security Conference Sunday. “Israel will not allow the regime to put a noose of terror around our neck,” he said. “We will act if necessary not just against Iran’s proxies but against Iran itself.”

The violence in the Middle East may not be winding down. It may be just getting started.

Iraq’s protesters: “No One Cares About Us But We Continue Our Revolution”