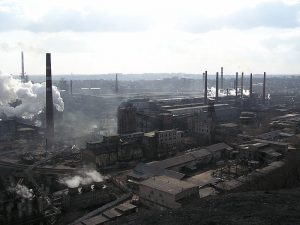 Ukraine no longer wants to rely on Russian gas or coal from the pro-Russian separatist occupied areas of East Ukraine, Donetsk and Luhansk. In the long-run, Ukraine will be stronger and more energy-independent; however, in the short-run, the country could experience energy shortages and blackouts, although these have yet materialize.

Since reducing its reliance on gas from the Russian energy giant Gazprom, Ukraine also has faced a blockage of anthracite coal shipments from Donbass, implemented by a cadre of Ukrainian veterans and volunteers to force the government to stop dealing with those they are at war with in the east. This has severely cut electrical output from its coal burning thermal plants that are tailored for the anthracite coal only mined in rebel-held territory. Ukraine has been lucky over the last winter that temperatures were warmer and an uptick in nuclear production helped stave off rolling blackouts. Industrial energy use also fell due to the blockade. However, with the 2017 winter approaching, Ukraine has decided to import coal rather than resume imports from Donbass. The effectiveness of this strategy is in doubt as cheap supplies are not plentiful in the region.

With the Ukrainian economy started to grow again, industrial energy use is sure to climb from its current low starting point. This will make coal imports a critical issue in the months ahead as industry is vital to Ukraine’s recovery. The Ukrainian government and the energy oligarch Akhmetov’s DTEK are both converting their coal-burning plants to a enable them to use a lower grade of fuel, writes Oilprice.com.

Some analysts are concerned Ukraine may end of eventually buying the coal mined from Donbass, after it is simply reshipped through Russian channels to the western, government-controlled parts of the country. There are also reports of importing South African and even American coal to meet demand.