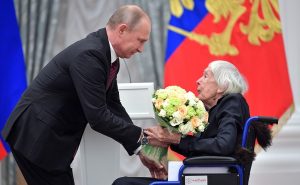 “The level of Putin’s popularity goes far beyond the borders of Russia. Hardly anyone can question Putin’s being the absolute leader of the public opinion, the absolute leader of the political pinnacle that hardly anyone can compete with seriously at the present stage…Putin has repeatedly confirmed his unquestionable leadership and continues to do this,” reported Russian state news agency TASS.

Kirill Kabanov, a member of the presidential human rights council, who monitored the situation in Moscow, added,
“There were no ungrounded detentions. Everything was done properly”

Estimates varied, from official and unofficial sources as to the number of Russians who attended the rallies called for by Navalny, from 1,200 to 5,000.

“In some settlements these actions, as a matter of fact not numerous, had been authorized, which is in line with the law. In certain places they had not been authorized and alternative suggestions as to the venue were declined in an emphatic manner. In this case they were against the legislation…Of course, the main thing here is to ensure law, security and public order,” added Peskov.

The Kremlin’s strategy of allowing the Navalny protests, while making sure they stayed small and impotent, had the effect of legitimizing Putin and marginalizing the opposition.