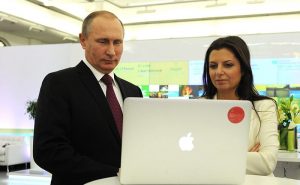 Russian President Vladimir Putin suggested that intelligence services should monitor ‘some companies’ for their internet activities during the coming Russian presidential election in 2018. This development is a natural progression for the Kremlin as they seek to ensure no surprises during the coming poll to select a Russian leader for the next 6 years.

“We need to look carefully at how some companies work in internet, in social media, and how widely they are involved in our domestic political life,” Putin said, speaking at a meeting with leaders in Russia’s parliament about a new “foreign agents” law, reported Reuters.

“It should be carefully analyzed how they are operating and will be operating during the presidential election,” he said, but said this should not “narrow the space” for freedom on the Internet.

Russia has seen press freedom limited over the last decade and opposition figures marginalized by various means. The main candidate who could have a chance against Putin, anti-corruption activist Alexei Navalny, is prevented from running due to an embezzlement conviction that analysts say was politically motivated.

Moscow has been very concerned with social unrest as the economy has contracted over the last several years, in conjunction with Western sanctions and the collapse of the price of oil on international markets.

The Kremlin has attempted to wind down operations in Syria before the elections as well, recently declaring the Islamic State was defeated in the Middle East and bringing home the majority of Russian forces that were deployed in the region.