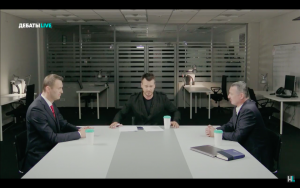 The Russian 2018 presidential election has started in earnest with the major candidates beginning attempts to shape the narrative with appearances on state television and social media, depending on the campaign’s capabilities.

No one is under any illusions about the possibility of defeating the sitting President of Russia, Vladimir Putin. However, that is not stopping several high-profile individuals from growing their base and name recognition for later attempts at the prize, after Putin steps down in 2024, barring any changes to the Russian constitution of course, that would allow Putin another term in office.

For his part, Putin has stated he has not made a decision whether to run or not next year for his remaining six year term, but he does not rule it out. The Russian President has made constant use of the state media apparatus to get his message out and shape his image in front of the Russian people. These are by far the most-watched and listened to media outlets in the country and gives Putin a tremendous advantage.

“I have not decided yet if I should continue my work in this capacity. I will see. The election will take place in 2018. There is still time ahead of the election race. We will see…I will have to do this sometime,” said Putin when speaking recently to a group of school children in Sochi on a live television broadcast, A Serious Talk With Vladimir Putin, regarding the possibility of stepping down, reported Russian state news agency TASS.

“The Constitution stipulates limited terms in office for president…I had a possibility [to amend the Constitution], and I was even being talked into changing the Constitution in due time. I did not do this. And I am not going to do this in the future.”

Kremlin opposition leader and anti-corruption activist, Alexei Navalny has been more savvy using social media to counter the Kremlin’s control of the airwaves. His Youtube channel has over 1 million followers and reaches a much younger audience, one the Kremlin has trouble reaching.

“Young Russians were among the most visible at anti-corruption protests organized by Navalny in March this year, and images of teenagers being forcefully detained by police flooded social media,” wrote The Moscow Times.

However, Navalny will most likely not be able to run as he has a prior conviction for embezzlement, one most likely trumped up for political reasons, to prevent Putin from facing a viable competitor. This has not stopped him however, from acting as if he is going to be allowed to compete.

Navalny recently debated Igor Girkin, a.k.a Strelkov, who was the leader of the pro-Russian resistance in East Ukraine, until forced out of office by Moscow. The event was televised on Youtube.

“He [Strelkov] says he has no political ambitions, but he’s an iconic figure among Russia right-wingers, who feel as underrepresented as liberals in Putin’s regime,” wrote Bloomberg.