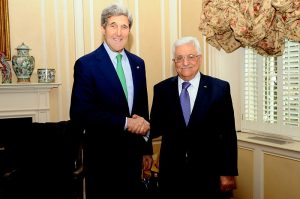 The Merriam-Webster dictionary defines sedition as follows: incitement of resistance to or insurrection against lawful authority. John Kerry and the Obama shadow government seem to have once again, crossed that line.

“Ma’ariv reported that former US Secretary of State John Kerry met in London with a close associate of Palestinian Authority President Mahmoud Abbas, Hussein Agha, for a long and open conversation about a variety of topics. Agha apparently reported details of the conversation to senior PA officials in Ramallah. A senior PA official confirmed to Ma’ariv that the meeting took place,” wrote the Jerusalem Post.

The Jerusalem Post goes on, “Kerry asked Agha to convey a message to Abbas and ask him to “hold on and be strong.” Tell him, he told Agha, “that he should stay strong in his spirit and play for time, that he will not break and will not yield to President Trump’s demands.” According to Kerry, Trump will not remain in office for a long time. It was reported that within a year there was a good chance that Trump would not be in the White House.

“Kerry offered his help to the Palestinians in an effort to advance the peace process and recommended that Abbas present his own peace plan. “Maybe it is time for the Palestinians to define their peace principles and present a positive plan,” Kerry suggested. He promised to use all his contacts and all his abilities to get support for such a plan. He asked Abbas, through Agha, not to attack the US or the Trump administration, but to concentrate on personal attacks on Trump himself, whom Kerry says is solely and directly responsible for the situation.

“According to the report, referring to the president, Kerry used derogatory terms and even worse. Kerry offered to help create an alternative peace initiative and promised to help garner international support, among others, of Europeans, Arab states and the international community. Kerry hinted that many in the American establishment, as well as in American intelligence, are dissatisfied with Trump’s performance and the way he leads America. He surprised his interlocutor by saying he was seriously considering running for president in 2020. When asked about his advanced age, he said he was not much older than Trump and would not have an age problem.”

With all of the information coming out of the FBI and the DOJ on the illegal scheming against the Trump administration, it seems John Kerry is in on the plot as he tells the leaders of terrorist groups that Trump will be out of office in a year.

The definition of treason is as follows: the betrayal of one’s own country by waging war against it or by consciously or purposely acting to aid its enemies. John Kerry and the Deep State have once again crossed that line.

Who Has The Better Weapons? US or Russia?