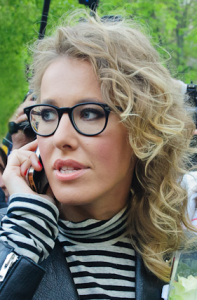 The socialite daughter of a former Putin confidant, and rival to the Russian president in the upcoming March election, has been invited to a prayer breakfast in Washington attended by U.S. President Donald Trump on Feb 1. Ksenia Sobchak, a Muscovite media personality will also make appearances at possibly Georgetown University to give a speech and New York City.

Sobchak has been criticized as a Kremlin ploy to show opposition, but not serious opposition. She has railed against the corrupt hold on power by the Kremlin establishment and fought against anti-corruption activist Alexei Navalny over the correct way for the opposition to fight Putin’s long reign.

Russian news outlet Interfax said Sobchak’s press secretary has not yet confirmed she will attend the prayer breakfast.

“I’m not a professional politician…But I’m not indifferent to what’s going on in my country,” Sobchak declared upon deciding to compete in the election.