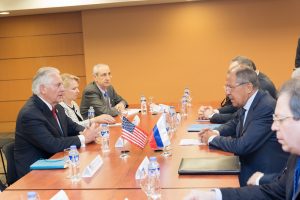 U.S. Secretary of State Rex Tillerson said on Tuesday the Syrian government may still be using chemical weapons against its own people following a suspected chlorine attack in a rebel enclave, and he said Russia bore ultimate responsibility.

Rescue workers in the rebel-held enclave of Eastern Ghouta, near to Damascus, accused government forces of using chlorine gas during bombardment of the area on Monday. The UK-based Syrian Observatory for Human Rights said at least 13 people had suffered suffocation in the incident…