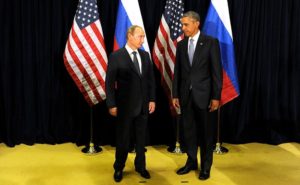 Russian president Vladimir Putin opened the door to renewed Middle East peace talks in Moscow in the near future according to the Egyptian president Abdel-Fattah al-Sisi.

“Putin has told me that he is ready to receive [Abbas] and Netanyahu in Moscow to carry out direct talks to find a solution,” Mr Sisi told Egyptian newspaper Al Aharam.

“I see that the conviction of the importance of peace is rising among the Israeli side, and the conviction about finding an exit to the issue is a positive sign.

“Egypt supports these efforts and both sides are urged to participate and respond positively to the initiative for the sake of finding light at the end of the tunnel for Palestinians and establishing their state alongside Israel.”

On Tuesday night, the Israeli government said it supported Mr Putin’s intervention and indicated Mr Netanyahu was ready “anywhere, any time, for direct peace talks with no preconditions, reports The Independent.

Russia has moved further and further into Middle Eastern geopolitics since the landing of their expeditionary force in Syria last year. The effort has been spectacularly successful in terms of Russia achieving the foreign policy goal of replacing the United States as the arbiter of influence in the region. The new axis of power between Russia and Iran now calls the shots in the Levant and the Fertile Crescent.

President Putin has a long memory. President Obama’s comments several years ago about Russia being a ‘regional power’ are probably still stuck in Putin’s craw. Solving the Israeli-Palestinian peace problem would be satisfying indeed for the Kremlin.

After being shut-out by the White House, I’m sure Israeli Prime Minister Netanyahu would also feel some satisfaction, that is if he could capture a deal that would ensure Israel’s security. The prospect of a Clinton presidency is something the Israeli government must prepare for. This scenario would most likely cement the loss of trust between Israel and the United States that was created under the Obama administration where Clinton served as America’s chief foreign policy negotiator.

Israel has accepted Putin’s invitation. The world waits for the Palestinian response.

US, Russia Open Center In Syria To Monitor Peace