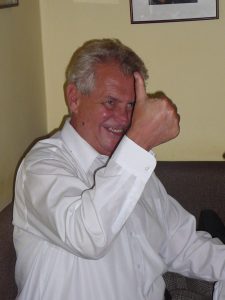 Czech President Milos Zeman will face a runoff in his bid for another term in office, against pro-Europe challenger Jiri Drahos.

“With nearly all the ballots counted on January 13, Zeman had 38.6 percent of the vote, with Drahos, a scientist, taking 26.6 percent. The third-place finisher had 10.2 percent. Since no candidate took more than 50 percent in the first round, Zeman and Drahos will meet in the runoff scheduled for January 26-27,” reported RFERL.

“I invite all those who want to vote for me to come to the polling stations in round two, too, and bring your friends, your lovers, and their mistresses…I congratulate Jiri Drahos for this beautiful second place,” declared the colorful Zeman.

Drahos urged all those “who want a change” to cast ballots in the runoff. “The final is still ahead of us, and that’s what matters.”

Zeman has been vociferously anti-migrant and anti-immigration, pro-gun rights, and has become a friend of Russian President Vladimir Putin.