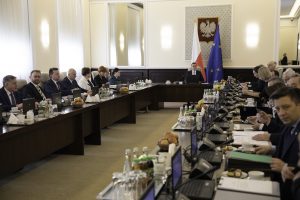 Poland’s new Prime Minister Mateusz Morawiecki believes he can ease the tension between the European Union and the Eastern European nation over its recent judicial reforms. Saying the entire episode is just a ‘misunderstanding’, Morawiecki outline his intention to create dialogue with Brussels on the issue.

Speaking in Warsaw last week, Morawiecki said he believed that dialogue with the European Commission would lead to “mutual understanding and de-escalation”.”I generally believe that with added effort to explain our intentions we will be able to clarify the misunderstandings…I want the European Commission to be assured, to be convinced that our judicial system is more independent, is more objective, is more transparent,” reported BBC.

The Polish PM’s main point was that the previous system created abuse by a Leftist judiciary and the solution’s Poland implemented were similar to other European countries.

The main issue seems to be a political one, as the Polish Law and Justice Party (PiS) is conservative and governs in a conservative manner. Similar to U.S. President Trump, efforts to derail the culturally Marxist agenda in Europe have met with wholesale attack by statists in power in Brussels.

Morawiecki has recently made other overtures to the EU by firing Poland’s Defence Minister Antoni Macierewicz and Foreign Minister Witold Waszczykowski to appease Brussels.

“We don’t want to be a dogmatic, doctrinaire or extremist government,” he said, following a meeting with Commission President Jean-Claude Juncker and Vice-President Frans Timmermans, wrote BBC.

In a good cop, bad cop routine, Polish President Andrzej Duda declared, while speaking last week to a reception for foreign ambassadors, that European Union institutions bear some responsibility for what he called “social disillusionment” with integration. Pointing out recent nationalist gains in some European capitals, Duda declared Brussels ‘tone deaf’ to the needs of European populations.