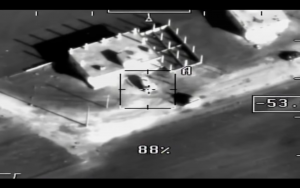 After suffering large drone attacks on its permanent Syrian military facilities at Hmeymim and Tartus, which caused the deaths of a least two serviceman and reportedly destroyed 7 combat aircraft, the Russian Defense Ministry seems to be concerned about similar attacks on the Crimean peninsula, forcibly annexed from Ukraine in 2014.

Russian officials have been preparing the news narrative about possible similar resistance from Ukrainian special services posing as Crimean Tartars who have been reportedly repressed after the annexation. A legislator from the Crimean region made comments recently about possible drone attacks on the peninsula. The statements seem to be an effort to blunt the propaganda effectiveness of any possible drone use against Russian interests in the region.

“An attack would be portrayed as an act of resistance by members of the Crimean Tatar community, which largely opposed Russia’s annexation of the peninsula,” reported The Moscow Times.

“The saboteurs do not believe in the successful outcome of the attack, the main task is information noise,” declared the State Duma deputy from the Crimean region Ruslan Balbek, adding that the Crimean Tatars living in Ukraine told him about this.

“There is already a well-worked out scheme: in the neutral waters, the American intelligence officer Poseidon is hanging, which should give out target designation and correction of data to Ukrainian drones, and although there is no doubt that this whole” sparrow flock “will be crushed, that this “operation of the Crimean-Tatar resistance,” should have the effect of an exploding bomb, “he explained.

The parliamentarian called on not to “turn a blind eye” to the flights of the “Poseidons”, which issue target designations to the Ukrainian military in the Crimea.

“Nothing should prevent us from including on our territory electronic warfare and suppression stations – we have to arrange a” spoiled telephone “for our Ukrainian colleagues,” Balbek said, reported RIA Novosti.

The drones used in Syria were primitive except for the guidance systems.

“I believe that the drones Islamic State terrorists used to attack Russia’s military base Hmeymim in Syria had been made in makeshift conditions from components available on the market of civilian products and often used to build aircraft models. The UAV’s airframe is the cheapest part of the system. Most probably the drones followed a pre-programmed route and were GPS-navigated. Apparently, the bombs were dropped when the drones reached certain coordinates. The bombs were equipped with contact detonators,” said editor-in-chief of the Bespilotnaya Aviatsiya (Unmanned Aviation) magazine, Denis Fedutinov, reported Russian state news agency TASS.

“Firstly, small drones may prove a no easy catch for such systems designed to fight large aircraft. Secondly, the target is far less costly than the counter-weapons. It looks like radio-electronic warfare means, including anti-drone systems will play a major role,” Fedutinov added.

Russian state media made a big splash declaring the terrorists who initiated the drone attacks were ‘eliminated’, putting out gun camera video of the impact of munitions on the terrorist’s location. Russian media outlet Kommersant discussed possible irregularities in the video.

“On one of the rollers you can see a curious detail. It is noticeable that at the 6th second of the video with the destruction of the militants an assembly gluing was done. People approaching the minibus suddenly disappear, and the car on the right side of the frame changes position. Then follows a video fragment with a minibus defeat. Apparently, a part of the video is cut out for up to 20 minutes, “the channel says. Authors of Directorate 4 suggest that with the help of video editing the Defense Ministry wanted to show that the blow was struck precisely at the moment when the terrorists left the transport. The military department has not yet commented on this information.

The video in question (below) was published yesterday. According to the Ministry of Defense, the sabotage group and its warehouse with drones have been destroyed by the high-precision Krasnopol munitions, reported Kommersant.