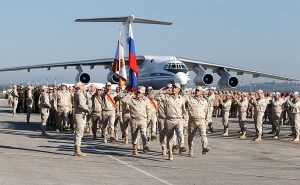 Russian Defense Minister Sergei Shoigu declared on Tuesday that the Russian armed forces would have a permanent presence in Syria at two facilities, the naval port at Tartus and the inland airbase at Khmeimim. Mr. Shoigu made the statements on a conference call with Russian military leaders. Russia has fielded a small naval presence at Tartus since Soviet times but the naval contingent on the Mediterranean will be expanded to include 11 warships, some with nuclear power, reported RIA news service.

A statement on the Russian Defense Ministry website read, “Minister of Defence pointed out that the fight against terrorists had been one of the key missions for the Aerospace Forces, military police, Marines, UAVs and the Navy. According to Sergei Shoigu, having defeated the ISIS terrorists in Syria, main part of military contingent returned home with victory. Minister of Defence announced that the Supreme Commander-in-Chief had approved the structure and staff of the main stationing bases in Tartus and Khmeimim.”

In an official tweet, Mr. Shoigu stated, “We have started to form a permanent presence there.” The agreement with the Syrian government allows Russia to keep the facilities in Syria for 49 years.

“If terrorists again raise head, we will deliver such strikes on them that they haven’t seen so far,” Russian President Vladimir Putin stated during a surprise visit to Syria earlier in the month.

Mr. Putin has achieved a great deal of success in influencing the facts of the ground in the Middle East with the Syrian expedition over the last several years. A goal of the former Soviet Union was a permanent Middle Eastern presence. It seems Mr. Putin shares this agenda.

Russia Prepares To Force The Pace In Ukraine