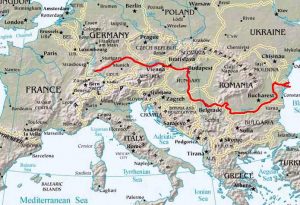 The German newspaper “Die Welt” reports that according to Greek PM Alexis Tsipras, three Western Balkan countries, Greece, Serbia and Montenegro, have agreed to construct a channel to connect the Danube river with the Mediterranean Sea. The project could be one of the largest in the European Union, with an approximate cost of €17 billion . The project intends to connect the Danube through Morava, Axios, and Termaic Bay west of Thessaloniki to the Aegean Sea. Construction will start as soon as financing is secured. Chinese companies have already shown interest.

Die Welt refers to the Mayor of Thessaloniki who, during a visit in Skopje, handed Macedonian President Ivanov a video of the future project.

Another German TV outlet, NTV, declared the project as ambitious, “Greeks, Serbs and Macedonians are planning to open a sailing channel to connect the Danube and the Mediterranean Sea. Such a visionary project can change the whole region forever.”

The canal would be an historic infrastructure project, giving new incentives to the economic and commercial activity of the Western Balkans.

A recent report from INSTAT based on World Bank information, reported by the online newspaper Monitor, ranks Albania as last in the region regarding labour productivity. The metric shows added gross value (GVA) for employed worker (production per employee). The average in the Balkans is $10,000 to $15,000. The data was shown in the World Bank’s latest report “Western Balkans: reviving the growth and prosperity engine”. Kosovo has the highest productivity with $18,000, followed by Montenegro, Bosnia, Serbia, Macedonia, then Albania. The regional challenge is that average labour productivity is less than half compared to the other 7 countries in transition, now members of the EU, (Bulgaria, Croatia, Estonia, Leetonia, Lithuania, Slovak Republic and Slovenia, where the GVA is $30,000.

In the rest of the European Union the production figures for employed workers are very high, reaching $100k in certain sectors, such as energy, gas and information technology.

The World Bank gives some suggestions on how to increase labour productivity. Foreign partners’ technology and expertise can help. High levels of skilled labour, reforms, and facilitating worker movement among companies, sectors, and geographical regions to more effective areas, can also help.

Labour market reforms which make limited labour movement easier, and improvement of governance and the transparency of public institutions, will improve productivity. A more friendly business environment for the private sector and deeper integration into the EU and global markets will decrease unemployment and increase income.

According to the World Bank, productivity is determined by the quality of production factors and the efficiency of their use. Albania suffers from low quality of human capital. This is a basic factors preventing Albania from becoming more prosperous.