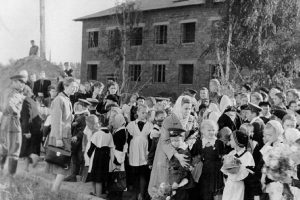 The Russian federal government has issued wartime mobilization guidelines to schools across the Russian Federation. A pamphlet detailing the process and procedures was leaked to the press in the Krasnoyarsk region of Siberia. Russian President Vladimir Putin has made wartime mobilization and preparations for nuclear war a priority.

“Local officials in Krasnoyarsk have confirmed the authenticity of the document that was distributed to the region’s schools and that issued operational guidelines for mobilization, wartime conditions and martial law. Nadezhda Kvitkovskaya, the regional education ministry spokeswoman, told Govorit Moskva radio station on Monday that according to federal guidelines, all state organizations should be prepared for mobilization, including educational institutions. Schools and other organizations should know how to “act in critical situations” during mobilization efforts, she said,” reported The Moscow Times.

Officials in the region were said to be looking for the leaker, “When the person who leaked this document online is found, they will be punished,” she said.

President Putin recently said that Russian corporations and businesses should be prepared to produce material and resources important during a conflict.

“I want to say that the economic ability to increase the production of defence products and services quickly is a vital element of military security. All strategic and simply large companies, regardless of the type of ownership, must be able to do this,” declared Putin as was posted on the Kremlin.ru website.

Putin has also called for frequent military ‘snap drills’ across the Russian Federation. These exercises have concerned NATO countries and resulted in the alliance moving heavy armor to the Russian border for the first time since the fall of the Soviet Union.

How Can You Kill Corruption When The Prosecutor’s Office Is Suspect?

Lavrov: No Quarter Given To Syrian Terrorists After Killing