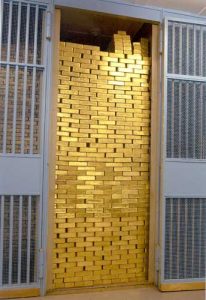 In a surprising, and unexpected warning – which seemingly came out of nowhere – Russia’s Finance Minister Anton Siluanov cautioned Washington yesterday that “If our gold and currency reserves can be arrested, even if such a thought exists, it would be financial terrorism.”

The comment appears to have been prompted by consideration of escalating US/EU sanctions which could ultimately impact Russia’s offshore held gold and reserves. If sanctions include the freezing of foreign accounts of the central bank, it would be equal to declaring financial war on Russia, Siluanov said, although he added that he considers such a scenario unlikely (for now).

After making the point that Russia’s budget is prepared for the possibility of tougher US/EU sanctions, RT reports that Siluanov warned if the west include the seizure of Russia’s foreign exchange reserves, it would be regarded as a “declaration of a financial war…”

Obama And Kerry Cave To Putin…