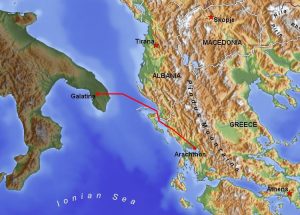 The fact that the Balkans are surrounded by powerful countries, such as Russia, Turkey, and Western Europe, makes the region vulnerable from problems these countries have in common, being small and poor, ethnic conflict, and corruption.

Recently, the western Balkans have looked east for economic aid. The press has often addressed Russian or Turkish influence and their maneuvers to extend their control in the region. However, currently Russia is weak and cannot spread its influence in most Balkan countries (except Serbia, where mostly it interferes politically), due to the strong political influence the EU has in the region, mainly due to EU extension.

After the 90’s, Turkey concentrated more on investments in Romania, Bulgaria and Greece, than in the other Balkan countries involved in ethnic conflicts. The foreign trade volume between Turkey and Western Balkans is relatively low. Only Albania and Kosovo have succeeded in attracting more Turkish capital, especially in telecommunication and road infrastructure. But the recent visit of the Turkish president Erdogan to Serbia, accompanied by 70 powerful businessmen and their promise to invest $5 billion in the coming years in Serbia have surprised everyone.

Another superpower is becoming an important investor in Southeast Europe. This is China, the biggest gross production country in the world and one of the strongest economies that is rapidly growing, so the mutual cooperation potential is huge.

According to recent studies from well-known European economists, Chinese companies are extending their businesses in the Balkans. They warn such an increasing economic influence could also influence the political situation. Chinese banks are lending money for the Balkan businesses. For years now, China has invested in transport infrastructure like roads, ports, railways, etc.

The relationships that China has cultivated with Albania have fostered greater economic cooperation. China is the only big country really investing in Albania. The commercial volume has increased by nearly 10% compared to previous years. Besides road infrastructure, China has made other very important investments, like the concession of Tirana’s “Mother Teresa” Airport by China Everbright or the purchase of Bankers Petrolium. There are 36 other projects being studied, as well.

In Serbia, China is financing the railway Belgrade-Budapest. In Macedonia, the Chinese Bank Eskim is investing in highway construction. In Greece, they already have the concession of Pireu Port.

These countries profit significantly from such investments, bringing higher quality, faster, and safer transport of people and goods, local and regional development, and economic growth for Balkan countries.

The problem is that Chinese banks approve loans for projects in these countries only if there is a Chinese company to run the project. They also employ Chinese workers. Most of the money goes back to China. Economically, it is mainly China that profits from loans.

All superpowers aim to have as much influence in the Balkan region as possible.

The EU has a big influence over all the Balkans due to support for reforms and the fight against corruption. But according to analysts, the Chinese advance in the region is a bell that needs to be heard. In the near future, this might be a warning for the EU, which still remains the most important partner for the region. Those who bring money and investment are always welcomed everywhere. So, Chinese investments through loans are useful, taking into account the region’s economic poverty.

If EU does not help these countries economically, another partner will probably do it.