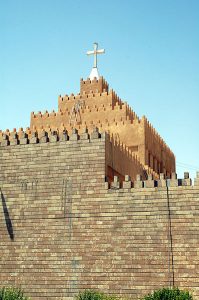 Speaking at the International Consultation on Christian Persecution conference titled ‘Searching for Answers to a Long-Ignored Crisis’ this week, Hungarian President Viktor Orban stated firmly that Europe risks losing its right to practice the religion in Europe if the bloc does not support, and protect, Christians being persecuted in the Middle East.

Opinion: Restrain Qatar To Counter The Shia Hegemon In The Middle East

“We, Hungarians, want Syriac, Iraqi, and Nigerian Christians to be able to return home to the land that their ancestors have inhabited for hundreds of years as soon as possible, this is what we call Hungarian solidarity … Hungary helps,” said the prime minister.

“A group of Europe’s intellectual and political leaders want to create a mixed society that would completely change the continent’s cultural and ethnic identity, and Christian nature, within just a few generations,” he continued.

“Hungary, however, is doing the opposite of what Europe is currently doing. We are doing what we must do according to local Christian leaders, and which is currently most important for the communities they lead: we are providing assistance to enable people to move back to their homes.

“The persecution of Christians in Europe, which is a persecution of a spiritual nature, operat[ing] using subtle and crafty methods, and is undoubtedly unjust, discriminative and sometimes painful”, but added that, in his view, “it can in no way be compared to the brutal and physical persecution suffered by Christians in Africa and the Middle East…The greatest danger threatening us today is the indifferent silence of the European elite who are renouncing their Christian roots, despite the fact that the fate of Middle Eastern Christians should wake Europe up to the fact that, no matter how unbelievable it may still seem, what happened there could also happen to us”.

“It is a fact that Christianity is the most persecuted religion in the world today, in view of the fact that 215 million Christians in 108 countries are currently suffering from various forms of persecution, four out of every five people who are being oppressed because of their faith are Christians, and in 2015 in Iraq, a Christian was murdered every five minutes because of their religious beliefs,” he declared.

“To us, Europe is a Christian continent and we would like to keep it that way, and although we may not be able to preserve all of it, we would at least like to save the little slice of it that the Good Lord entrusted to the Hungarians,” reported Breitbart News.