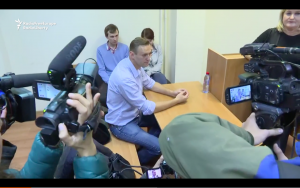 Kremlin opposition leader and anti-corruption activist, Alexei Navalny, was sentenced to a 20 day prison stay this week. The move was widely seen as a warning to the possible presidential candidate to back off his attempts to discredit the Putin government and run for president in 2018.

The official reason was that Navalny organized unapproved rallies across the country in his bid to build political momentum. The rallies have been startlingly successful to the Kremlin and Navalny was arrested on the way to another one recently in central Russia.

When the unexpected sentence was announced he declared, “It’s a birthday present for the old man Putin,” Navalny retorted, referring to President Vladimir Putin. “He’s frightened of our rallies.”

“We might need to get used to each other,” Navalny joked to the judge. “We’ve got many more rallies planned.”

Navalny currently is serving a suspended sentence from an embezzlement charge many see as politically motivated. His brother was also put in prison for 3.5 years in another move widely seen as pressure applied to Alexei Navalny. The new 20 day sentence most likely is a warning that much harsher punishment is forthcoming if he does not stop his activism.