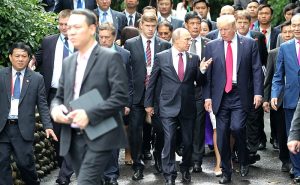 “The Russian president thanked his US counterpart for information shared by the US Central Intelligence Agency (CIA) that helped trace, expose and detain a group of terrorists who had plotted explosions in St. Petersburg’s Kazan Cathedral and in other crowded places in that city,” the press service said, adding that the conversation was initiated by the Russian side, reported Russia state news agency TASS.

Putin declared that “Russian security services, should they have information about possible terrorist threats to the United States and its citizens, will swiftly and unconditionally share it with the US colleagues via partner channels.”

The information transmitted to Russia by American intelligence allowed several members of a cell to be arrested and attacks thwarted.

After the fall of the Soviet Union Russia and American routinely shared intelligence on law enforcement and terror-relate matters but cooperation has dried up during the last decade’s tense relations between the two nations.

PACOM Pushes Back On China’s Belt And Road Rebranding