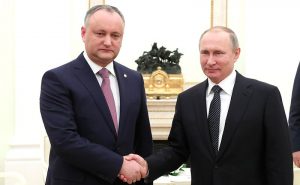 Moldova’s political landscape continues to shudder as the country’s Socialist Party has launched an effort to expand the powers of the pro-Russia president, Igor Dodon. A referendum scheduled by the head of state Dodon was terminated by the Constitutional Court after being ruled ‘beyond presidential authority.’

“Moldova’s opposition Socialist Party says it is launching a campaign to increase the powers of the president and turn the country’s current parliamentary system of government into a presidential one,” writes RFERL. “In the planned referendum, Moldovans would have been asked whether the president should be allowed to dissolve parliament and announce early elections; whether the number of deputies in the single-chamber legislature should be reduced from 101 to 71; and whether history classes that are called History of Romanians should be renamed History of Moldova.”

Rallies were held across the country by the Socialists on the same day the referendum had been scheduled.

The government has been split between the pro-EU prime minister, Filip Pavel, and President Dodon who wants Moldova to move under Russia’s influence.

Dodon recently vetoed the PM’s choice for defense minister and attempted to stop NATO troops from participating in NATO exercises.

Moldovan officials have faced harassment in Russia and Romania/Moldova recently refused air space for the flight of the Russian deputy prime minister to visit the Russian-controlled breakaway enclave of Transdniestria.